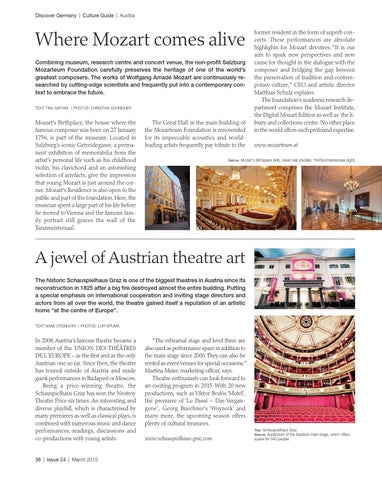 Where Mozart comes alive Combining museum, research centre and concert venue, the non-profit Salzburg Mozarteum Foundation carefully preserves the heritage of one of the world’s greatest composers. The works of Wolfgang Amadé Mozart are continuously researched by cutting-edge scientists and frequently put into a contemporary context to embrace the future. TEXT: TINA AWTANI | PHOTOS: CHRISTIAN SCHNEIDER

Mozart’s Birthplace, the house where the famous composer was born on 27 January 1756, is part of the museum. Located in Salzburg’s iconic Getreidegasse, a permanent exhibition of memorabilia from the artist’s personal life such as his childhood violin, his clavichord and an astonishing selection of artefacts, give the impression that young Mozart is just around the corner. Mozart’s Residence is also open to the public and part of the foundation. Here, the musician spent a large part of his life before he moved to Vienna and the famous family portrait still graces the wall of the Tanzmeistersaal.

former resident in the form of superb concerts. These performances are absolute highlights for Mozart devotees. “It is our aim to spark new perspectives and new cause for thought in the dialogue with the composer and bridging the gap beween the preservation of tradition and contemporary culture,“ CEO and artistic director Matthias Schulz explains. The foundation’s academic research department comprises the Mozart Institute, the Digital Mozart Edition as well as the library and collections centre. No other place in the world offers such profound expertise. www.mozarteum.at

A jewel of Austrian theatre art The historic Schauspielhaus Graz is one of the biggest theatres in Austria since its reconstruction in 1825 after a big fire destroyed almost the entire building. Putting a special emphasis on international cooperation and inviting stage directors and actors from all over the world, the theatre gained itself a reputation of an artistic home “at the centre of Europe”. TEXT: NANE STEINHOFF | PHOTOS: LUPI SPUMA

In 2008, Austria’s famous theatre became a member of the UNION DES THÉÂTRES DE L´EUROPE – as the first and as the only Austrian one so far. Since then, the theatre has toured outside of Austria and made guest performances in Budapest or Moscow. Being a price-winning theatre, the Schauspielhaus Graz has won the Nestroy Theatre Price six times. An interesting and diverse playbill, which is characterised by many premieres as well as classical plays, is combined with numerous music and dance performances, readings, discussions and co-productions with young artists.

“The rehearsal stage and level three are also used as performance space in addition to the main stage since 2000. They can also be rented as event venues for special occasions,” Martina Maier, marketing officer, says. Theatre enthusiasts can look forward to an exciting program in 2015. With 20 new productions, such as Viktor Bodós ‘Motel’, the premiere of ‘Le Passé – Das Vergangene’, Georg Buechner’s ‘Woyzeck’ and many more, the upcoming season offers plenty of cultural treasures. www.schauspielhaus-graz.com

Top: Schauspielhaus Graz. Above: Auditorium of the theatre’s main stage, which offers space for 540 people.