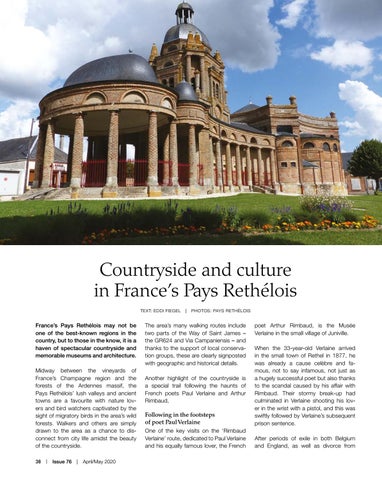 France’s Pays Rethélois may not be one of the best-known regions in the country, but to those in the know, it is a haven of spectacular countryside and memorable museums and architecture. Midway between the vineyards of France’s Champagne region and the forests of the Ardennes massif, the Pays Rethélois’ lush valleys and ancient towns are a favourite with nature lovers and bird watchers captivated by the sight of migratory birds in the area’s wild forests. Walkers and others are simply drawn to the area as a chance to disconnect from city life amidst the beauty of the countryside. 38  |  Issue 76  |  April/May 2020

The area’s many walking routes include two parts of the Way of Saint James – the GR624 and Via Campaniensis – and thanks to the support of local conservation groups, these are clearly signposted with geographic and historical details.

poet Arthur Rimbaud, is the Musée Verlaine in the small village of Juniville.

Following in the footsteps of poet Paul Verlaine

When the 33-year-old Verlaine arrived in the small town of Rethel in 1877, he was already a cause celèbre and famous, not to say infamous, not just as a hugely successful poet but also thanks to the scandal caused by his affair with Rimbaud. Their stormy break-up had culminated in Verlaine shooting his lover in the wrist with a pistol, and this was swiftly followed by Verlaine’s subsequent prison sentence.

One of the key visits on the ‘Rimbaud Verlaine’ route, dedicated to Paul Verlaine and his equally famous lover, the French

After periods of exile in both Belgium and England, as well as divorce from

Another highlight of the countryside is a special trail following the haunts of French poets Paul Verlaine and Arthur Rimbaud,