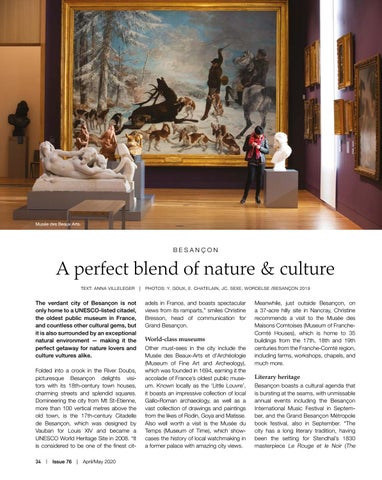 The verdant city of Besançon is not only home to a UNESCO-listed citadel, the oldest public museum in France, and countless other cultural gems, but it is also surrounded by an exceptional natural environment — making it the perfect getaway for nature lovers and culture vultures alike. Folded into a crook in the River Doubs, picturesque Besançon delights visitors with its 18th-century town houses, charming streets and splendid squares. Domineering the city from Mt St-Etienne, more than 100 vertical metres above the old town, is the 17th-century Citadelle de Besançon, which was designed by Vauban for Louis XIV and became a UNESCO World Heritage Site in 2008. “It is considered to be one of the finest cit34  |  Issue 76  |  April/May 2020

adels in France, and boasts spectacular views from its ramparts,” smiles Christine Bresson, head of communication for Grand Besançon.

World-class museums Other must-sees in the city include the Musée des Beaux-Arts et d’Archéologie (Museum of Fine Art and Archeology), which was founded in 1694, earning it the accolade of France’s oldest public museum. Known locally as the ‘Little Louvre’, it boasts an impressive collection of local Gallo-Roman archaeology, as well as a vast collection of drawings and paintings from the likes of Rodin, Goya and Matisse. Also well worth a visit is the Musée du Temps (Museum of Time), which showcases the history of local watchmaking in a former palace with amazing city views.

Meanwhile, just outside Besançon, on a 37-acre hilly site in Nancray, Christine recommends a visit to the Musée des Maisons Comtoises (Museum of FrancheComté Houses), which is home to 35 buildings from the 17th, 18th and 19th centuries from the Franche-Comté region, including farms, workshops, chapels, and much more.

Literary heritage Besançon boasts a cultural agenda that is bursting at the seams, with unmissable annual events including the Besançon International Music Festival in September, and the Grand Besançon Métropole book festival, also in September. “The city has a long literary tradition, having been the setting for Stendhal’s 1830 masterpiece Le Rouge et le Noir (The