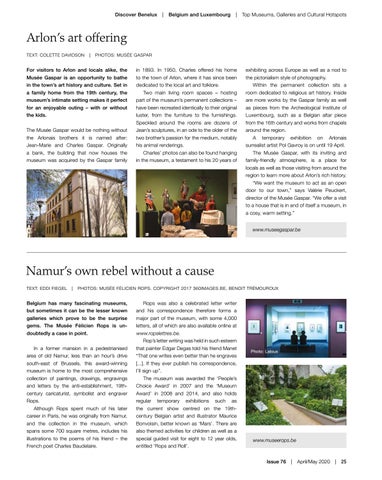 For visitors to Arlon and locals alike, the Musée Gaspar is an opportunity to bathe in the town’s art history and culture. Set in a family home from the 19th century, the museum’s intimate setting makes it perfect for an enjoyable outing – with or without the kids. The Musée Gaspar would be nothing without the Arlonais brothers it is named after: Jean-Marie and Charles Gaspar. Originally a bank, the building that now houses the museum was acquired by the Gaspar family

in 1893. In 1950, Charles offered his home to the town of Arlon, where it has since been dedicated to the local art and folklore. Two main living room spaces – hosting part of the museum’s permanent collections – have been recreated identically to their original luster, from the furniture to the furnishings. Speckled around the rooms are dozens of Jean’s sculptures, in an ode to the older of the two brother’s passion for the medium, notably his animal renderings. Charles’ photos can also be found hanging in the museum, a testament to his 20 years of

exhibiting across Europe as well as a nod to the pictorialism style of photography. Within the permanent collection sits a room dedicated to religious art history. Inside are more works by the Gaspar family as well as pieces from the Archeological Institute of Luxembourg, such as a Belgian altar piece from the 16th century and works from chapels around the region. A temporary exhibition on Arlonais surrealist artist Pol Gavroy is on until 19 April. The Musée Gaspar, with its inviting and family-friendly atmosphere, is a place for locals as well as those visiting from around the region to learn more about Arlon’s rich history. “We want the museum to act as an open door to our town,” says Valérie Peuckert, director of the Musée Gaspar. “We offer a visit to a house that is in and of itself a museum, in a cosy, warm setting.” www.museegaspar.be

Belgium has many fascinating museums, but sometimes it can be the lesser known galleries which prove to be the surprise gems. The Musée Félicien Rops is undoubtedly a case in point. In a former mansion in a pedestrianised area of old Namur, less than an hour’s drive south-east of Brussels, this award-winning museum is home to the most comprehensive collection of paintings, drawings, engravings and letters by the anti-establishment, 19thcentury caricaturist, symbolist and engraver Rops. Although Rops spent much of his later career in Paris, he was originally from Namur, and the collection in the museum, which spans some 700 square metres, includes his illustrations to the poems of his friend – the French poet Charles Baudelaire.

Rops was also a celebrated letter writer and his correspondence therefore forms a major part of the museum, with some 4,000 letters, all of which are also available online at www.ropslettres.be. Rop’s letter writing was held in such esteem that painter Edgar Degas told his friend Manet “That one writes even better than he engraves [...]. If they ever publish his correspondence, I’ll sign up”. The museum was awarded the ‘People’s Choice Award’ in 2007 and the ‘Museum Award’ in 2008 and 2014, and also holds regular temporary exhibitions such as the current show centred on the 19thcentury Belgian artist and illustrator Maurice Bonvoisin, better known as ‘Mars’. There are also themed activities for children as well as a special guided visit for eight to 12 year olds, entitled ‘Rops and Roll’.