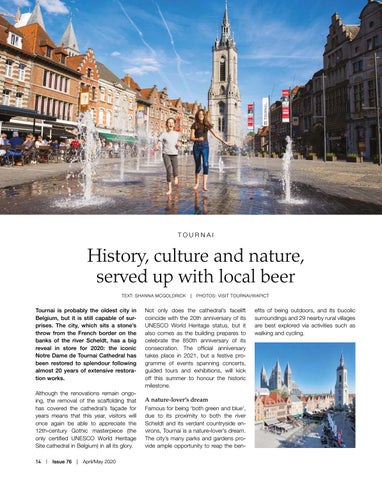 Tournai is probably the oldest city in Belgium, but it is still capable of surprises. The city, which sits a stone’s throw from the French border on the banks of the river Scheldt, has a big reveal in store for 2020: the iconic Notre Dame de Tournai Cathedral has been restored to splendour following almost 20 years of extensive restoration works. Although the renovations remain ongoing, the removal of the scaffolding that has covered the cathedral’s façade for years means that this year, visitors will once again be able to appreciate the 12th-century Gothic masterpiece (the only certified UNESCO World Heritage Site cathedral in Belgium) in all its glory. 14  |  Issue 76  |  April/May 2020

Not only does the cathedral’s facelift coincide with the 20th anniversary of its UNESCO World Heritage status, but it also comes as the building prepares to celebrate the 850th anniversary of its consecration. The official anniversary takes place in 2021, but a festive programme of events spanning concerts, guided tours and exhibitions, will kick off this summer to honour the historic milestone.

A nature-lover’s dream Famous for being ‘both green and blue’, due to its proximity to both the river Scheldt and its verdant countryside environs, Tournai is a nature-lover’s dream. The city’s many parks and gardens provide ample opportunity to reap the ben-

efits of being outdoors, and its bucolic surroundings and 29 nearby rural villages are best explored via activities such as walking and cycling.