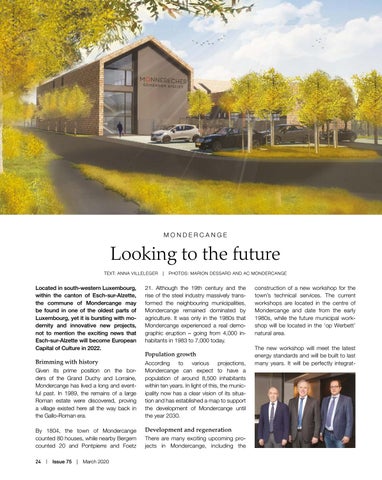 Located in south-western Luxembourg, within the canton of Esch-sur-Alzette, the commune of Mondercange may be found in one of the oldest parts of Luxembourg, yet it is bursting with modernity and innovative new projects, not to mention the exciting news that Esch-sur-Alzette will become European Capital of Culture in 2022.

Brimming with history Given its prime position on the borders of the Grand Duchy and Lorraine, Mondercange has lived a long and eventful past. In 1989, the remains of a large Roman estate were discovered, proving a village existed here all the way back in the Gallo-Roman era. By 1804, the town of Mondercange counted 80 houses, while nearby Bergem counted 20 and Pontpierre and Foetz 24  |  Issue 75  |  March 2020

21. Although the 19th century and the rise of the steel industry massively transformed the neighbouring municipalities, Mondercange remained dominated by agriculture. It was only in the 1980s that Mondercange experienced a real demographic eruption – going from 4,000 inhabitants in 1983 to 7,000 today.

Population growth According to various projections, Mondercange can expect to have a population of around 8,500 inhabitants within ten years. In light of this, the municipality now has a clear vision of its situation and has established a map to support the development of Mondercange until the year 2030.

Development and regeneration There are many exciting upcoming projects in Mondercange, including the

Inside the March issue you can enjoy an exclusive interview with Brussels-born comedian Guillermo Guiz, a guide to some of the most delicious Dutch snacks and an inspiring education & training special. There’s also a Rotterdam city special, a bumper guide to Luxembourg and profiles of Belgium’s top breweries, distilleries and winemakers.