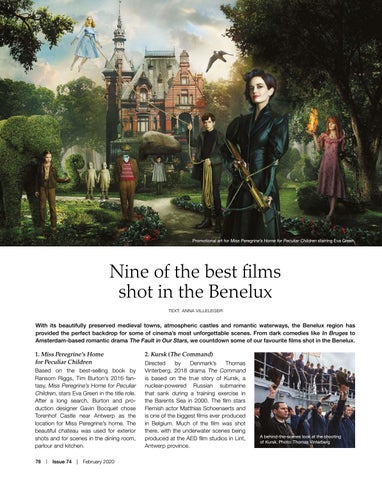 Nine of the best films shot in the Benelux TEXT: ANNA VILLELEGER

With its beautifully preserved medieval towns, atmospheric castles and romantic waterways, the Benelux region has provided the perfect backdrop for some of cinema’s most unforgettable scenes. From dark comedies like In Bruges to Amsterdam-based romantic drama The Fault in Our Stars, we countdown some of our favourite films shot in the Benelux.

2. Kursk (The Command) Directed by Denmark’s Thomas Vinterberg, 2018 drama The Command is based on the true story of Kursk, a nuclear-powered Russian submarine that sank during a training exercise in the Barents Sea in 2000. The film stars Flemish actor Matthias Schoenaerts and is one of the biggest films ever produced in Belgium. Much of the film was shot there, with the underwater scenes being produced at the AED film studios in Lint, Antwerp province.

A behind-the-scenes look at the shooting of Kursk. Photo: Thomas Vinterberg