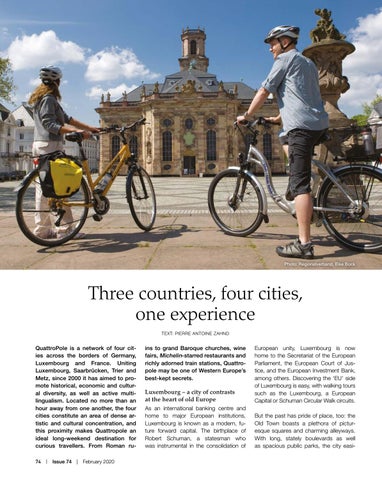 QuattroPole is a network of four cities across the borders of Germany, Luxembourg and France. Uniting Luxembourg, Saarbrücken, Trier and Metz, since 2000 it has aimed to promote historical, economic and cultural diversity, as well as active multilingualism. Located no more than an hour away from one another, the four cities constitute an area of dense artistic and cultural concentration, and this proximity makes Quattropole an ideal long-weekend destination for curious travellers. From Roman ru74  |  Issue 74  |  February 2020

Luxembourg – a city of contrasts at the heart of old Europe

As an international banking centre and home to major European institutions, Luxembourg is known as a modern, future forward capital. The birthplace of Robert Schuman, a statesman who was instrumental in the consolidation of

But the past has pride of place, too: the Old Town boasts a plethora of picturesque squares and charming alleyways. With long, stately boulevards as well as spacious public parks, the city easi-