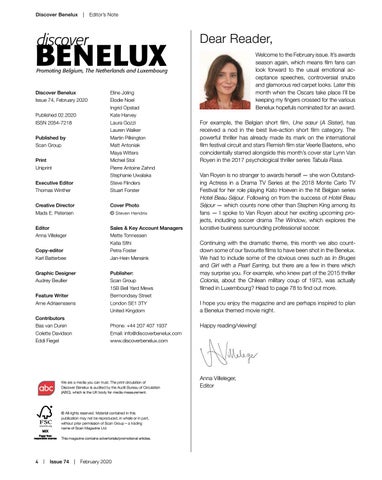 We are a media you can trust. The print circulation of Discover Benelux is audited by the Audit Bureau of Circulation (ABC), which is the UK body for media measurement.

© All rights reserved. Material contained in this publication may not be reproduced, in whole or in part, without prior permission of Scan Group – a trading name of Scan Magazine Ltd. This magazine contains advertorials/promotional articles.

Welcome to the February issue. It’s awards season again, which means film fans can look forward to the usual emotional acceptance speeches, controversial snubs and glamorous red carpet looks. Later this month when the Oscars take place I’ll be keeping my fingers crossed for the various Benelux hopefuls nominated for an award. For example, the Belgian short film, Une sœur (A Sister), has received a nod in the best live-action short film category. The powerful thriller has already made its mark on the international film festival circuit and stars Flemish film star Veerle Baetens, who coincidentally starred alongside this month’s cover star Lynn Van Royen in the 2017 psychological thriller series Tabula Rasa. Van Royen is no stranger to awards herself — she won Outstanding Actress in a Drama TV Series at the 2018 Monte Carlo TV Festival for her role playing Kato Hoeven in the hit Belgian series Hotel Beau Séjour. Following on from the success of Hotel Beau Séjour — which counts none other than Stephen King among its fans — I spoke to Van Royen about her exciting upcoming projects, including soccer drama The Window, which explores the lucrative business surrounding professional soccer. Continuing with the dramatic theme, this month we also countdown some of our favourite films to have been shot in the Benelux. We had to include some of the obvious ones such as In Bruges and Girl with a Pearl Earring, but there are a few in there which may surprise you. For example, who knew part of the 2015 thriller Colonia, about the Chilean military coup of 1973, was actually filmed in Luxembourg? Head to page 78 to find out more. I hope you enjoy the magazine and are perhaps inspired to plan a Benelux themed movie night. Happy reading/viewing!