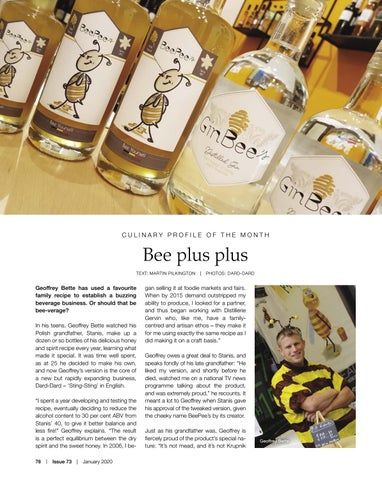 CULINARY PROFILE OF THE MONTH

Geoffrey Bette has used a favourite family recipe to establish a buzzing beverage business. Or should that be bee-verage? In his teens, Geoffrey Bette watched his Polish grandfather, Stanis, make up a dozen or so bottles of his delicious honey and spirit recipe every year, learning what made it special. It was time well spent, as at 25 he decided to make his own, and now Geoffrey’s version is the core of a new but rapidly expanding business, Dard-Dard – ‘Sting-Sting’ in English. “I spent a year developing and testing the recipe, eventually deciding to reduce the alcohol content to 30 per cent ABV from Stanis’ 40, to give it better balance and less fire!” Geoffrey explains. “The result is a perfect equilibrium between the dry spirit and the sweet honey. In 2006, I be78  |  Issue 73  |  January 2020

gan selling it at foodie markets and fairs. When by 2015 demand outstripped my ability to produce, I looked for a partner, and thus began working with Distillerie Gervin who, like me, have a familycentred and artisan ethos – they make it for me using exactly the same recipe as I did making it on a craft basis.” Geoffrey owes a great deal to Stanis, and speaks fondly of his late grandfather: “He liked my version, and shortly before he died, watched me on a national TV news programme talking about the product, and was extremely proud,” he recounts. It meant a lot to Geoffrey when Stanis gave his approval of the tweaked version, given the cheeky name BeePee’s by its creator. Just as his grandfather was, Geoffrey is fiercely proud of the product’s special nature: “It’s not mead, and it’s not Krupnik