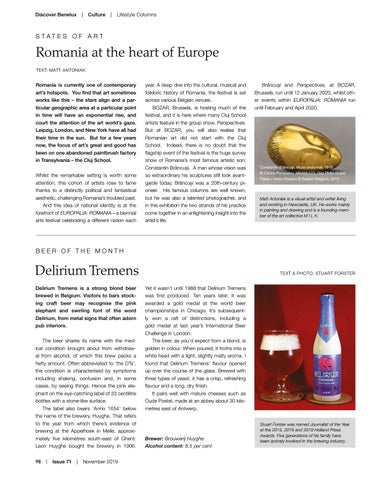 Romania at the heart of Europe TEXT: MATT ANTONIAK

Romania is currently one of contemporary art’s hotspots. You find that art sometimes works like this – the stars align and a particular geographic area at a particular point in time will have an exponential rise, and court the attention of the art world’s gaze. Leipzig, London, and New York have all had their time in the sun. But for a few years now, the focus of art’s great and good has been on one abandoned paintbrush factory in Transylvania – the Cluj School. Whilst the remarkable setting is worth some attention, this cohort of artists rose to fame thanks to a distinctly political and fantastical aesthetic, challenging Romania’s troubled past. And this idea of national identity is at the forefront of EUROPALIA: ROMANIA – a biennial arts festival celebrating a different nation each

year. A deep dive into the cultural, musical and folkloric history of Romania, the festival is set across various Belgian venues. BOZAR, Brussels, is hosting much of the festival, and it is here where many Cluj School artists feature in the group show, Perspectives. But at BOZAR, you will also realise that Romanian art did not start with the Cluj School. Indeed, there is no doubt that the flagship event of the festival is the huge survey show of Romania’s most famous artistic son: Constantin Brâncuși. A man whose vision was so extraordinary his sculptures still look avantgarde today, Brâncuși was a 20th-century pioneer. His famous columns are well known, but he was also a talented photographer, and in this exhibition the two strands of his practice come together in an enlightening insight into the artist’s life.

Brâncuși and Perspectives, at BOZAR, Brussels, run until 12 January 2020, whilst other events within EUROPALIA: ROMANIA run until February and April 2020.

Delirium Tremens Delirium Tremens is a strong blond beer brewed in Belgium. Visitors to bars stocking craft beer may recognise the pink elephant and swirling font of the word Delirium, from metal signs that often adorn pub interiors. The beer shares its name with the medical condition brought about from withdrawal from alcohol, of which this brew packs a hefty amount. Often abbreviated to ‘the DTs’, the condition is characterised by symptoms including shaking, confusion and, in some cases, by seeing things. Hence the pink elephant on the eye-catching label of 33 centilitre bottles with a stone-like surface. The label also bears ‘Anno 1654’ below the name of the brewery, Huyghe. That refers to the year from which there’s evidence of brewing at the Appelhoek in Melle, approximately five kilometres south-east of Ghent. Leon Huyghe bought the brewery in 1906. 98  |  Issue 71  |  November 2019

Yet it wasn’t until 1988 that Delirium Tremens was first produced. Ten years later, it was awarded a gold medal at the world beer championships in Chicago. It’s subsequently won a raft of distinctions, including a gold medal at last year’s International Beer Challenge in London. The beer, as you’d expect from a blond, is golden in colour. When poured, it froths into a white head with a light, slightly malty aroma. I found that Delirium Tremens’ flavour opened up over the course of the glass. Brewed with three types of yeast, it has a crisp, refreshing flavour and a long, dry finish. It pairs well with mature cheeses such as Oude Postel, made at an abbey about 30 kilometres east of Antwerp.