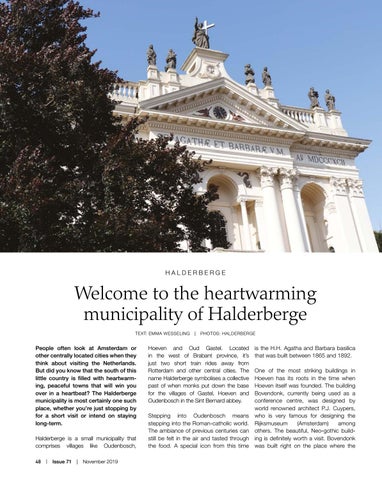 People often look at Amsterdam or other centrally located cities when they think about visiting the Netherlands. But did you know that the south of this little country is filled with heartwarming, peaceful towns that will win you over in a heartbeat? The Halderberge municipality is most certainly one such place, whether you’re just stopping by for a short visit or intend on staying long-term. Halderberge is a small municipality that comprises villages like Oudenbosch, 48  |  Issue 71  |  November 2019

Hoeven and Oud Gastel. Located in the west of Brabant province, it’s just two short train rides away from Rotterdam and other central cities. The name Halderberge symbolises a collective past of when monks put down the base for the villages of Gastel, Hoeven and Oudenbosch in the Sint Bernard abbey. Stepping into Oudenbosch means stepping into the Roman-catholic world. The ambiance of previous centuries can still be felt in the air and tasted through the food. A special icon from this time

is the H.H. Agatha and Barbara basilica that was built between 1865 and 1892. One of the most striking buildings in Hoeven has its roots in the time when Hoeven itself was founded. The building Bovendonk, currently being used as a conference centre, was designed by world renowned architect P.J. Cuypers, who is very famous for designing the Rijksmuseum (Amsterdam) among others. The beautiful, Neo-gothic building is definitely worth a visit. Bovendonk was built right on the place where the