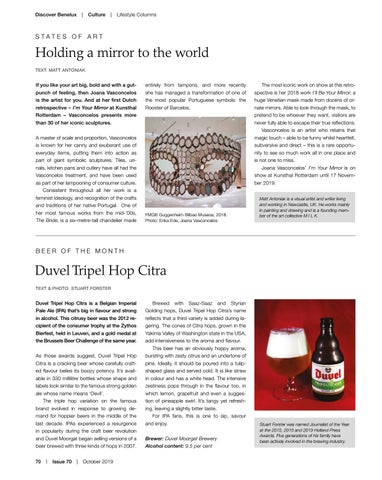 Holding a mirror to the world TEXT: MATT ANTONIAK

If you like your art big, bold and with a gutpunch of feeling, then Joana Vasconcelos is the artist for you. And at her first Dutch retrospective – I’m Your Mirror at Kunsthal Rotterdam – Vasconcelos presents more than 30 of her iconic sculptures. A master of scale and proportion, Vasconcelos is known for her canny and exuberant use of everyday items, putting them into action as part of giant symbolic sculptures. Tiles, urinals, kitchen pans and cutlery have all had the Vasconcelos treatment, and have been used as part of her lampooning of consumer culture. Consistent throughout all her work is a feminist ideology, and recognition of the crafts and traditions of her native Portugal. One of her most famous works from the mid-’00s, The Bride, is a six-metre-tall chandelier made

entirely from tampons, and more recently she has managed a transformation of one of the most popular Portuguese symbols: the Rooster of Barcelos.

The most iconic work on show at this retrospective is her 2018 work I’ll Be Your Mirror; a huge Venetian mask made from dozens of ornate mirrors. Able to look through the mask, to pretend to be whoever they want, visitors are never fully able to escape their true reflections. Vasconcelos is an artist who retains that magic touch – able to be funny whilst heartfelt, subversive and direct – this is a rare opportunity to see so much work all in one place and is not one to miss. Joana Vasconcelos’ I’m Your Mirror is on show at Kunsthal Rotterdam until 17 November 2019. Matt Antoniak is a visual artist and writer living and working in Newcastle, UK. He works mainly in painting and drawing and is a founding member of the art collective M I L K.

Duvel Tripel Hop Citra is a Belgian Imperial Pale Ale (IPA) that’s big in flavour and strong in alcohol. This citrusy beer was the 2012 recipient of the consumer trophy at the Zythos Bierfest, held in Leuven, and a gold medal at the Brussels Beer Challenge of the same year. As those awards suggest, Duvel Tripel Hop Citra is a cracking beer whose carefully crafted flavour belies its boozy potency. It’s available in 330 millilitre bottles whose shape and labels look similar to the famous strong golden ale whose name means ‘Devil’. The triple hop variation on the famous brand evolved in response to growing demand for hoppier beers in the middle of the last decade. IPAs experienced a resurgence in popularity during the craft beer revolution and Duvel Moorgat began selling versions of a beer brewed with three kinds of hops in 2007. 70  |  Issue 70  |  October 2019

Brewed with Saaz-Saaz and Styrian Golding hops, Duvel Tripel Hop Citra’s name reflects that a third variety is added during lagering. The cones of Citra hops, grown in the Yakima Valley of Washington state in the USA, add intensiveness to the aroma and flavour. This beer has an obviously hoppy aroma, bursting with zesty citrus and an undertone of pine. Ideally, it should be poured into a tulipshaped glass and served cold. It is like straw in colour and has a white head. The intensive zestiness pops through in the flavour too, in which lemon, grapefruit and even a suggestion of pineapple swirl. It’s tangy yet refreshing, leaving a slightly bitter taste. For IPA fans, this is one to sip, savour and enjoy. Brewer: Duvel Moorgat Brewery Alcohol content: 9.5 per cent