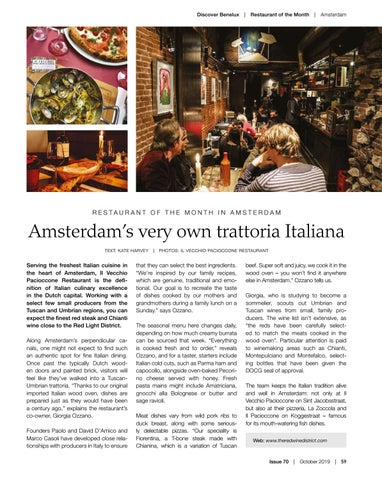 Serving the freshest Italian cuisine in the heart of Amsterdam, Il Vecchio Pacioccone Restaurant is the definition of Italian culinary excellence in the Dutch capital. Working with a select few small producers from the Tuscan and Umbrian regions, you can expect the finest red steak and Chianti wine close to the Red Light District. Along Amsterdam’s perpendicular canals, one might not expect to find such an authentic spot for fine Italian dining. Once past the typically Dutch wooden doors and painted brick, visitors will feel like they’ve walked into a TuscanUmbrian trattoria. “Thanks to our original imported Italian wood oven, dishes are prepared just as they would have been a century ago,” explains the restaurant’s co-owner, Giorgia Ozzano. Founders Paolo and David D’Amico and Marco Casoli have developed close relationships with producers in Italy to ensure

that they can select the best ingredients. “We’re inspired by our family recipes, which are genuine, traditional and emotional. Our goal is to recreate the taste of dishes cooked by our mothers and grandmothers during a family lunch on a Sunday.” says Ozzano. The seasonal menu here changes daily, depending on how much creamy burrata can be sourced that week. “Everything is cooked fresh and to order,” reveals Ozzano, and for a taster, starters include Italian cold cuts, such as Parma ham and capocollo, alongside oven-baked Pecorino cheese served with honey. Fresh pasta mains might include Amatriciana, gnocchi alla Bolognese or butter and sage ravioli. Meat dishes vary from wild pork ribs to duck breast, along with some seriously delectable pizzas. “Our speciality is Fiorentina, a T-bone steak made with Chianina, which is a variation of Tuscan

beef. Super soft and juicy, we cook it in the wood oven – you won’t find it anywhere else in Amsterdam.” Ozzano tells us. Giorgia, who is studying to become a sommelier, scouts out Umbrian and Tuscan wines from small, family producers. The wine list isn’t extensive, as “the reds have been carefully selected to match the meats cooked in the wood oven”. Particular attention is paid to winemaking areas such as Chianti, Montepulciano and Montefalco, selecting bottles that have been given the DOCG seal of approval. The team keeps the Italian tradition alive and well in Amsterdam: not only at Il  Vecchio Pacioccone on Sint Jacobsstraat, but also at their pizzeria, La Zoccola and Il Pacioccone on Koggestraat – famous for its mouth-watering fish dishes. Web: www.theredwinedistrict.com