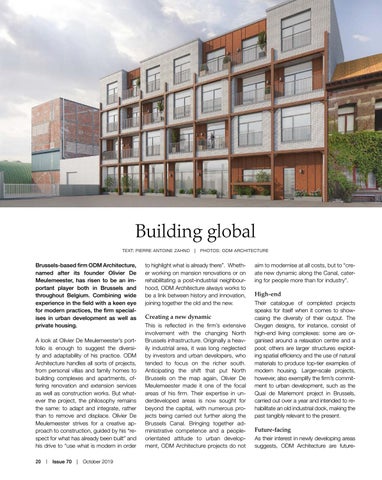 Brussels-based firm ODM Architecture, named after its founder Olivier De Meulemeester, has risen to be an important player both in Brussels and throughout Belgium. Combining wide experience in the field with a keen eye for modern practices, the firm specialises in urban development as well as private housing. A look at Olivier De Meulemeester’s portfolio is enough to suggest the diversity and adaptability of his practice. ODM Architecture handles all sorts of projects, from personal villas and family homes to building complexes and apartments, offering renovation and extension services as well as construction works. But whatever the project, the philosophy remains the same: to adapt and integrate, rather than to remove and displace. Olivier De Meulemeester strives for a creative approach to construction, guided by his “respect for what has already been built” and his drive to “use what is modern in order 20  |  Issue 70  |  October 2019

to highlight what is already there”. Whether working on mansion renovations or on rehabilitating a post-industrial neighbourhood, ODM Architecture always works to be a link between history and innovation, joining together the old and the new.

Creating a new dynamic This is reflected in the firm’s extensive involvement with the changing North Brussels infrastructure. Originally a heavily industrial area, it was long neglected by investors and urban developers, who tended to focus on the richer south. Anticipating the shift that put North Brussels on the map again, Olivier De Meulemeester made it one of the focal areas of his firm. Their expertise in underdeveloped areas is now sought for beyond the capital, with numerous projects being carried out further along the Brussels Canal. Bringing together administrative competence and a peopleorientated attitude to urban development, ODM Architecture projects do not

aim to modernise at all costs, but to “create new dynamic along the Canal, catering for people more than for industry”.

High-end Their catalogue of completed projects speaks for itself when it comes to showcasing the diversity of their output. The Oxygen designs, for instance, consist of high-end living complexes: some are organised around a relaxation centre and a pool; others are larger structures exploiting spatial efficiency and the use of natural materials to produce top-tier examples of modern housing. Larger-scale projects, however, also exemplify the firm’s commitment to urban development, such as the Quai de Mariemont project in Brussels, carried out over a year and intended to rehabilitate an old industrial dock, making the past tangibly relevant to the present.

Future-facing As their interest in newly developing areas suggests, ODM Architecture are future-