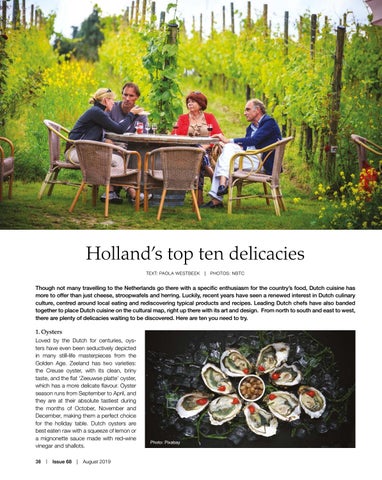 Though not many travelling to the Netherlands go there with a specific enthusiasm for the country’s food, Dutch cuisine has more to offer than just cheese, stroopwafels and herring. Luckily, recent years have seen a renewed interest in Dutch culinary culture, centred around local eating and rediscovering typical products and recipes. Leading Dutch chefs have also banded together to place Dutch cuisine on the cultural map, right up there with its art and design. From north to south and east to west, there are plenty of delicacies waiting to be discovered. Here are ten you need to try.

1. Oysters Loved by the Dutch for centuries, oysters have even been seductively depicted in many still-life masterpieces from the Golden Age. Zeeland has two varieties: the Creuse oyster, with its clean, briny taste, and the flat ‘Zeeuwse platte’ oyster, which has a more delicate flavour. Oyster season runs from September to April, and they are at their absolute tastiest during the months of October, November and December, making them a perfect choice for the holiday table. Dutch oysters are best eaten raw with a squeeze of lemon or a mignonette sauce made with red-wine vinegar and shallots. 38  |  Issue 68  |  August 2019