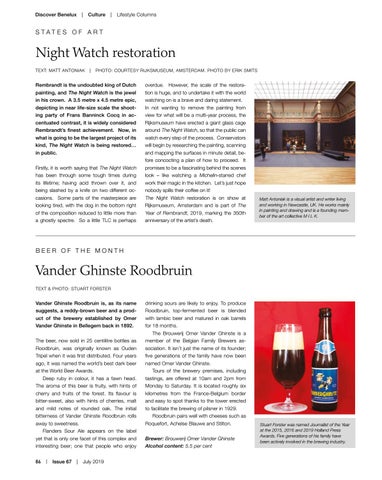 Rembrandt is the undoubted king of Dutch painting, and The Night Watch is the jewel in his crown. A 3.5 metre x 4.5 metre epic, depicting in near life-size scale the shooting party of Frans Banninck Cocq in accentuated contrast, it is widely considered Rembrandt’s finest achievement. Now, in what is going to be the largest project of its kind, The Night Watch is being restored… in public. Firstly, it is worth saying that The Night Watch has been through some tough times during its lifetime; having acid thrown over it, and being slashed by a knife on two different occasions. Some parts of the masterpiece are looking tired, with the dog in the bottom right of the composition reduced to little more than a ghostly spectre. So a little TLC is perhaps

overdue. However, the scale of the restoration is huge, and to undertake it with the world watching on is a brave and daring statement. In not wanting to remove the painting from view for what will be a multi-year process, the Rijksmuseum have erected a giant glass cage around The Night Watch, so that the public can watch every step of the process. Conservators will begin by researching the painting, scanning and mapping the surfaces in minute detail, before concocting a plan of how to proceed. It promises to be a fascinating behind the scenes look – like watching a Michelin-starred chef work their magic in the kitchen. Let’s just hope nobody spills their coffee on it! The Night Watch restoration is on show at Rijksmuseum, Amsterdam and is part of The Year of Rembrandt, 2019, marking the 350th anniversary of the artist’s death.

Vander Ghinste Roodbruin is, as its name suggests, a reddy-brown beer and a product of the brewery established by Omer Vander Ghinste in Bellegem back in 1892. The beer, now sold in 25 centilitre bottles as Roodbruin, was originally known as Ouden Tripel when it was first distributed. Four years ago, it was named the world’s best dark beer at the World Beer Awards. Deep ruby in colour, it has a fawn head. The aroma of this beer is fruity, with hints of cherry and fruits of the forest. Its flavour is bitter-sweet, also with hints of cherries, malt and mild notes of rounded oak. The initial bitterness of Vander Ghinste Roodbruin rolls away to sweetness. Flanders Sour Ale appears on the label yet that is only one facet of this complex and interesting beer; one that people who enjoy 86  |  Issue 67  |  July 2019

drinking sours are likely to enjoy. To produce Roodbruin, top-fermented beer is blended with lambic beer and matured in oak barrels for 18 months. The Brouwerij Omer Vander Ghinste is a member of the Belgian Family Brewers association. It isn’t just the name of its founder; five generations of the family have now been named Omer Vander Ghinste. Tours of the brewery premises, including tastings, are offered at 10am and 2pm from Monday to Saturday. It is located roughly six kilometres from the France-Belgium border and easy to spot thanks to the tower erected to facilitate the brewing of pilsner in 1929. Roodbruin pairs well with cheeses such as Roquefort, Achelse Blauwe and Stilton. Brewer: Brouwerij Omer Vander Ghinste Alcohol content: 5.5 per cent