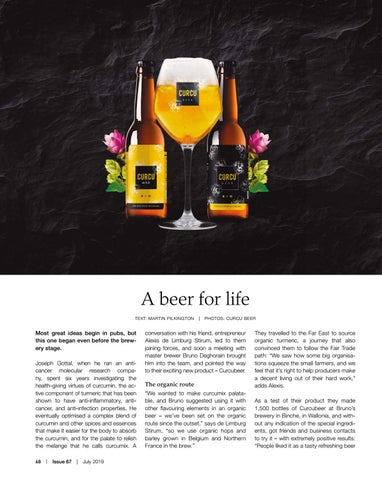 Most great ideas begin in pubs, but this one began even before the brewery stage. Joseph Gottal, when he ran an anticancer molecular research company, spent six years investigating the health-giving virtues of curcumin, the active component of turmeric that has been shown to have anti-inflammatory, anticancer, and anti-infection properties. He eventually optimised a complex blend of curcumin and other spices and essences that make it easier for the body to absorb the curcumin, and for the palate to relish the melange that he calls curcumix. A 68  |  Issue 67  |  July 2019

conversation with his friend, entrepreneur Alexis de Limburg Stirum, led to them joining forces, and soon a meeting with master brewer Bruno Deghorain brought him into the team, and pointed the way to their exciting new product – Curcubeer.

They travelled to the Far East to source organic turmeric, a journey that also convinced them to follow the Fair Trade path: “We saw how some big organisations squeeze the small farmers, and we feel that it’s right to help producers make a decent living out of their hard work,” adds Alexis.

“We wanted to make curcumix palatable, and Bruno suggested using it with other flavouring elements in an organic beer – we’ve been set on the organic route since the outset,” says de Limburg Stirum, “so we use organic hops and barley grown in Belgium and Northern France in the brew.”

As a test of their product they made 1,500 bottles of Curcubeer at Bruno’s brewery in Binche, in Wallonia, and without any indication of the special ingredients, got friends and business contacts to try it – with extremely positive results: “People liked it as a tasty refreshing beer