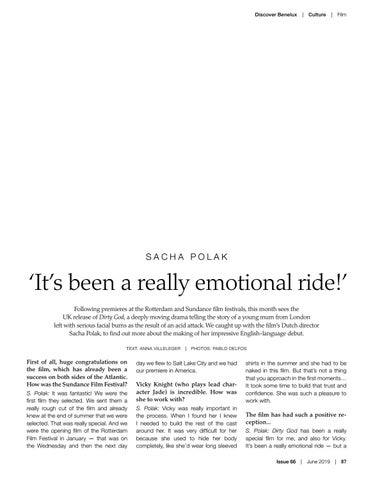 ‘It’s been a really emotional ride!’ Following premieres at the Rotterdam and Sundance film festivals, this month sees the UK release of Dirty God, a deeply moving drama telling the story of a young mum from London left with serious facial burns as the result of an acid attack. We caught up with the film’s Dutch director Sacha Polak, to find out more about the making of her impressive English-language debut. TEXT: ANNA VILLELEGER  |  PHOTOS: PABLO DELFOS

First of all, huge congratulations on the film, which has already been a success on both sides of the Atlantic. How was the Sundance Film Festival? S. Polak: It was fantastic! We were the first film they selected. We sent them a really rough cut of the film and already knew at the end of summer that we were selected. That was really special. And we were the opening film of the Rotterdam Film Festival in January — that was on the Wednesday and then the next day

day we flew to Salt Lake City and we had our premiere in America.

Vicky Knight (who plays lead character Jade) is incredible. How was she to work with? S. Polak: Vicky was really important in the process. When I found her I knew I needed to build the rest of the cast around her. It was very difficult for her because she used to hide her body completely, like she’d wear long sleeved

shirts in the summer and she had to be naked in this film. But that’s not a thing that you approach in the first moments… It took some time to build that trust and confidence. She was such a pleasure to work with.

The film has had such a positive reception...