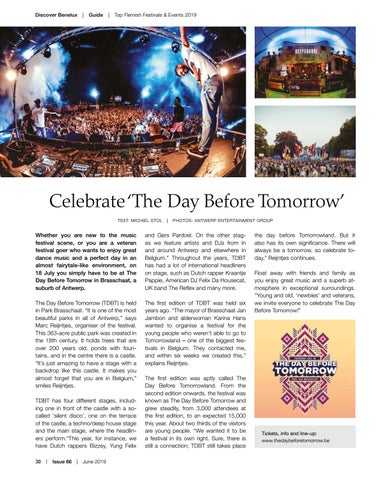 Whether you are new to the music festival scene, or you are a veteran festival goer who wants to enjoy great dance music and a perfect day in an almost fairytale-like environment, on 18 July you simply have to be at The Day Before Tomorrow in Brasschaat, a suburb of Antwerp.

and Gers Pardoel. On the other stages we feature artists and DJs from in and around Antwerp and elsewhere in Belgium.” Throughout the years, TDBT has had a lot of international headliners on stage, such as Dutch rapper Kraantje Pappie, American DJ Felix Da Housecat, UK band The Reflex and many more.

The Day Before Tomorrow (TDBT) is held in Park Brasschaat. “It is one of the most beautiful parks in all of Antwerp,” says Marc Reijntjes, organiser of the festival. This 363-acre public park was created in the 18th century. It holds trees that are over 200 years old, ponds with fountains, and in the centre there is a castle. “It’s just amazing to have a stage with a backdrop like this castle. It makes you almost forget that you are in Belgium,” smiles Reijntjes.

The first edition of TDBT was held six years ago. “The mayor of Brasschaat Jan Jambon and alderwoman Karina Hans wanted to organise a festival for the young people who weren’t able to go to Tomorrowland – one of the biggest festivals in Belgium. They contacted me, and within six weeks we created this,” explains Reijntjes.

TDBT has four different stages, including one in front of the castle with a socalled ‘silent disco’, one on the terrace of the castle, a techno/deep house stage and the main stage, where the headliners perform.“This year, for instance, we have Dutch rappers Bizzey, Yung Felix 30  |  Issue 66  |  June 2019

The first edition was aptly called The Day Before Tomorrowland. From the second edition onwards, the festival was known as The Day Before Tomorrow and grew steadily, from 3,000 attendees at the first edition, to an expected 15,000 this year. About two thirds of the visitors are young people. “We wanted it to be a festival in its own right. Sure, there is still a connection; TDBT still takes place

the day before Tomorrowland. But it also has its own significance. There will always be a tomorrow, so celebrate today,” Reijntjes continues. Float away with friends and family as you enjoy great music and a superb atmosphere in exceptional surroundings. “Young and old, ‘newbies’ and veterans, we invite everyone to celebrate The Day Before Tomorrow!”