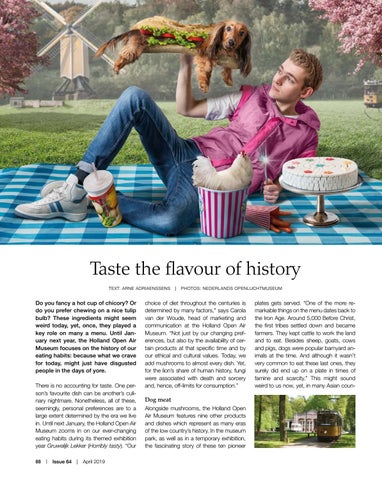 Do you fancy a hot cup of chicory? Or do you prefer chewing on a nice tulip bulb? These ingredients might seem weird today, yet, once, they played a key role on many a menu. Until January next year, the Holland Open Air Museum focuses on the history of our eating habits: because what we crave for today, might just have disgusted people in the days of yore. There is no accounting for taste. One person’s favourite dish can be another’s culinary nightmare. Nonetheless, all of these, seemingly, personal preferences are to a large extent determined by the era we live in. Until next January, the Holland Open Air Museum zooms in on our ever-changing eating habits during its themed exhibition year Gruwelijk Lekker (Horribly tasty). “Our 88  |  Issue 64  |  April 2019

choice of diet throughout the centuries is determined by many factors,” says Carola van der Woude, head of marketing and communication at the Holland Open Air Museum. “Not just by our changing preferences, but also by the availability of certain products at that specific time and by our ethical and cultural values. Today, we add mushrooms to almost every dish. Yet, for the lion’s share of human history, fungi were associated with death and sorcery and, hence, off-limits for consumption.”

Dog meat Alongside mushrooms, the Holland Open Air Museum features nine other products and dishes which represent as many eras of the low country’s history. In the museum park, as well as in a temporary exhibition, the fascinating story of these ten pioneer

plates gets served. “One of the more remarkable things on the menu dates back to the Iron Age. Around 5,000 Before Christ, the first tribes settled down and became farmers. They kept cattle to work the land and to eat. Besides sheep, goats, cows and pigs, dogs were popular barnyard animals at the time. And although it wasn’t very common to eat these last ones, they surely did end up on a plate in times of famine and scarcity.” This might sound weird to us now, yet, in many Asian coun-