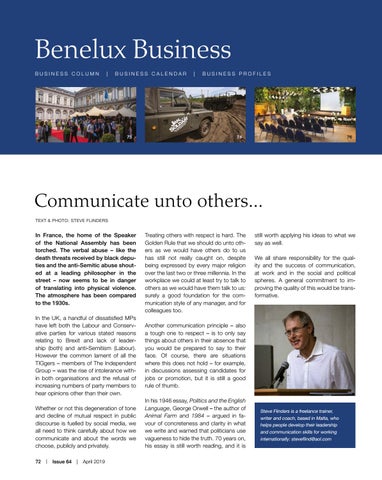 In France, the home of the Speaker of the National Assembly has been torched. The verbal abuse – like the death threats received by black deputies and the anti-Semitic abuse shouted at a leading philosopher in the street – now seems to be in danger of translating into physical violence. The atmosphere has been compared to the 1930s. In the UK, a handful of dissatisfied MPs have left both the Labour and Conservative parties for various stated reasons relating to Brexit and lack of leadership (both) and anti-Semitism (Labour). However the common lament of all the TIGgers – members of The Independent Group – was the rise of intolerance within both organisations and the refusal of increasing numbers of party members to hear opinions other than their own. Whether or not this degeneration of tone and decline of mutual respect in public discourse is fuelled by social media, we all need to think carefully about how we communicate and about the words we choose, publicly and privately. 72  |  Issue 64  |  April 2019

Treating others with respect is hard. The Golden Rule that we should do unto others as we would have others do to us has still not really caught on, despite being expressed by every major religion over the last two or three millennia. In the workplace we could at least try to talk to others as we would have them talk to us: surely a good foundation for the communication style of any manager, and for colleagues too.

still worth applying his ideas to what we say as well. We all share responsibility for the quality and the success of communication, at work and in the social and political spheres. A general commitment to improving the quality of this would be transformative.

Another communication principle – also a tough one to respect – is to only say things about others in their absence that you would be prepared to say to their face. Of course, there are situations where this does not hold – for example, in discussions assessing candidates for jobs or promotion, but it is still a good rule of thumb. In his 1946 essay, Politics and the English Language, George Orwell – the author of Animal Farm and 1984 – argued in favour of concreteness and clarity in what we write and warned that politicians use vagueness to hide the truth. 70 years on, his essay is still worth reading, and it is