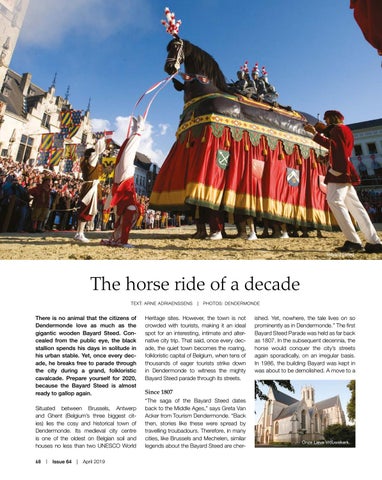 There is no animal that the citizens of Dendermonde love as much as the gigantic wooden Bayard Steed. Concealed from the public eye, the black stallion spends his days in solitude in his urban stable. Yet, once every decade, he breaks free to parade through the city during a grand, folkloristic cavalcade. Prepare yourself for 2020, because the Bayard Steed is almost ready to gallop again. Situated between Brussels, Antwerp and Ghent (Belgium’s three biggest cities) lies the cosy and historical town of Dendermonde. Its medieval city centre is one of the oldest on Belgian soil and houses no less than two UNESCO World 68  |  Issue 64  |  April 2019

Heritage sites. However, the town is not crowded with tourists, making it an ideal spot for an interesting, intimate and alternative city trip. That said, once every decade, the quiet town becomes the roaring, folkloristic capital of Belgium, when tens of thousands of eager tourists strike down in Dendermonde to witness the mighty Bayard Steed parade through its streets.

ished. Yet, nowhere, the tale lives on so prominently as in Dendermonde.” The first Bayard Steed Parade was held as far back as 1807. In the subsequent decennia, the horse would conquer the city’s streets again sporadically, on an irregular basis. In 1986, the building Bayard was kept in was about to be demolished. A move to a

Since 1807 “The saga of the Bayard Steed dates back to the Middle Ages,” says Greta Van Acker from Tourism Dendermonde. “Back then, stories like these were spread by travelling troubadours. Therefore, in many cities, like Brussels and Mechelen, similar legends about the Bayard Steed are cher-