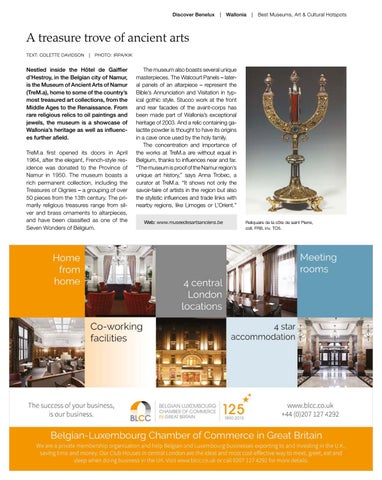 Nestled inside the Hôtel de Gaiffier d’Hestroy, in the Belgian city of Namur, is the Museum of Ancient Arts of Namur (TreM.a), home to some of the country’s most treasured art collections, from the Middle Ages to the Renaissance. From rare religious relics to oil paintings and jewels, the museum is a showcase of Wallonia’s heritage as well as influences further afield. TreM.a first opened its doors in April 1964, after the elegant, French-style residence was donated to the Province of Namur in 1950. The museum boasts a rich permanent collection, including the Treasures of Oignies – a grouping of over 50 pieces from the 13th century. The primarily religious treasures range from silver and brass ornaments to altarpieces, and have been classified as one of the Seven Wonders of Belgium.

The museum also boasts several unique masterpieces. The Walcourt Panels – lateral panels of an altarpiece – represent the Bible’s Annunciation and Visitation in typical gothic style. Stucco work at the front and rear facades of the avant-corps has been made part of Wallonia’s exceptional heritage of 2003. And a relic containing galactite powder is thought to have its origins in a cave once used by the holy family. The concentration and importance of the works at TreM.a are without equal in Belgium, thanks to influences near and far. “The museum is proof of the Namur region’s unique art history,” says Anna Trobec, a curator at TreM.a. “It shows not only the savoir-faire of artists in the region but also the stylistic influences and trade links with nearby regions, like Limoges or L’Orient.” Web: www.museedesartsanciens.be