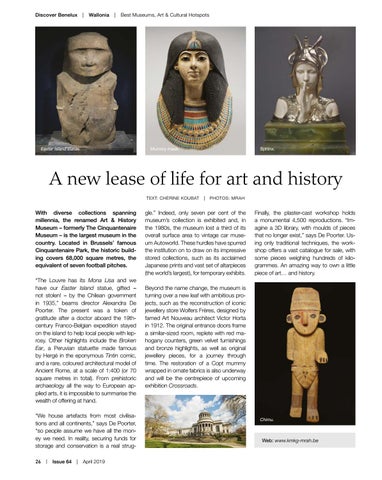 With diverse collections spanning millennia, the renamed Art &amp; History Museum – formerly The Cinquantenaire Museum – is the largest museum in the country. Located in Brussels’ famous Cinquantenaire Park, the historic building covers 68,000 square metres, the equivalent of seven football pitches. “The Louvre has its Mona Lisa and we have our Easter Island statue, gifted – not stolen! – by the Chilean government in 1935,” beams director Alexandra De Poorter. The present was a token of gratitude after a doctor aboard the 19thcentury Franco-Belgian expedition stayed on the island to help local people with leprosy. Other highlights include the Broken Ear, a Peruvian statuette made famous by Hergé in the eponymous Tintin comic, and a rare, coloured architectural model of Ancient Rome, at a scale of 1:400 (or 70 square metres in total). From prehistoric archaeology all the way to European applied arts, it is impossible to summarise the wealth of offering at hand. “We house artefacts from most civilisations and all continents,” says De Poorter, “so people assume we have all the money we need. In reality, securing funds for storage and conservation is a real strug26  |  Issue 64  |  April 2019

gle.” Indeed, only seven per cent of the museum’s collection is exhibited and, in the 1980s, the museum lost a third of its overall surface area to vintage car museum Autoworld. These hurdles have spurred the institution on to draw on its impressive stored collections, such as its acclaimed Japanese prints and vast set of altarpieces (the world’s largest), for temporary exhibits.

Finally, the plaster-cast workshop holds a monumental 4,500 reproductions. “Imagine a 3D library, with moulds of pieces that no longer exist,” says De Poorter. Using only traditional techniques, the workshop offers a vast catalogue for sale, with some pieces weighing hundreds of kilogrammes. An amazing way to own a little piece of art… and history.

Beyond the name change, the museum is turning over a new leaf with ambitious projects, such as the reconstruction of iconic jewellery store Wolfers Frères, designed by famed Art Nouveau architect Victor Horta in 1912. The original entrance doors frame a similar-sized room, replete with red mahogany counters, green velvet furnishings and bronze highlights, as well as original jewellery pieces, for a journey through time. The restoration of a Copt mummy wrapped in ornate fabrics is also underway and will be the centrepiece of upcoming exhibition Crossroads.