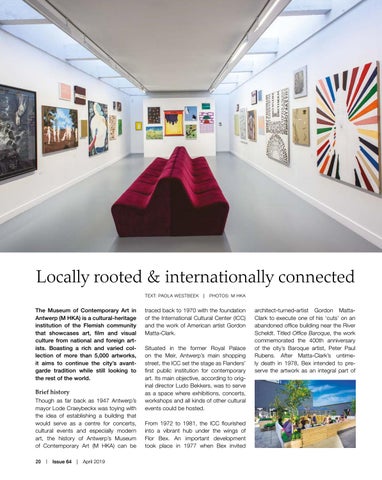 The Museum of Contemporary Art in Antwerp (M HKA) is a cultural-heritage institution of the Flemish community that showcases art, film and visual culture from national and foreign artists. Boasting a rich and varied collection of more than 5,000 artworks, it aims to continue the city’s avantgarde tradition while still looking to the rest of the world.

Brief history Though as far back as 1947 Antwerp’s mayor Lode Craeybeckx was toying with the idea of establishing a building that would serve as a centre for concerts, cultural events and especially modern art, the history of Antwerp’s Museum of Contemporary Art (M HKA) can be 20  |  Issue 64  |  April 2019

traced back to 1970 with the foundation of the International Cultural Center (ICC) and the work of American artist Gordon Matta-Clark. Situated in the former Royal Palace on the Meir, Antwerp’s main shopping street, the ICC set the stage as Flanders’ first public institution for contemporary art. Its main objective, according to original director Ludo Bekkers, was to serve as a space where exhibitions, concerts, workshops and all kinds of other cultural events could be hosted. From 1972 to into a vibrant Flor Bex. An took place in

1981, the ICC flourished hub under the wings of important development 1977 when Bex invited

architect-turned-artist Gordon MattaClark to execute one of his ‘cuts’ on an abandoned office building near the River Scheldt. Titled Office Baroque, the work commemorated the 400th anniversary of the city’s Baroque artist, Peter Paul Rubens. After Matta-Clark’s untimely death in 1978, Bex intended to preserve the artwork as an integral part of