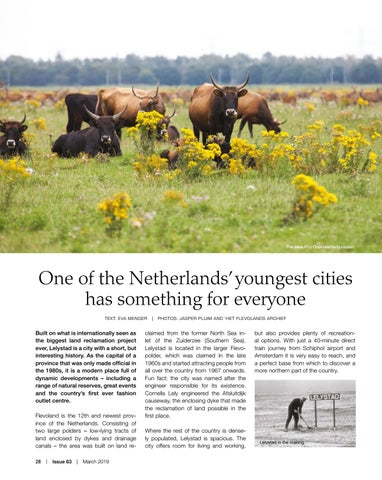 One of the Netherlands’ youngest cities has something for everyone TEXT: EVA MENGER  |  PHOTOS: JASPER PLUIM AND ‘HET FLEVOLANDS ARCHIEF

Built on what is internationally seen as the biggest land reclamation project ever, Lelystad is a city with a short, but interesting history. As the capital of a province that was only made official in the 1980s, it is a modern place full of dynamic developments – including a range of natural reserves, great events and the country’s first ever fashion outlet centre. Flevoland is the 12th and newest province of the Netherlands. Consisting of two large polders – low-lying tracts of land enclosed by dykes and drainage canals – the area was built on land re28  |  Issue 63  |  March 2019

claimed from the former North Sea inlet of the Zuiderzee (Southern Sea). Lelystad is located in the larger Flevopolder, which was claimed in the late 1960s and started attracting people from all over the country from 1967 onwards. Fun fact: the city was named after the engineer responsible for its existence. Cornelis Lely engineered the Afsluitdijk causeway, the enclosing dyke that made the reclamation of land possible in the first place. Where the rest of the country is densely populated, Lelystad is spacious. The city offers room for living and working,

but also provides plenty of recreational options. With just a 40-minute direct train journey from Schiphol airport and Amsterdam it is very easy to reach, and a perfect base from which to discover a more northern part of the country.

Lelystad in the making.