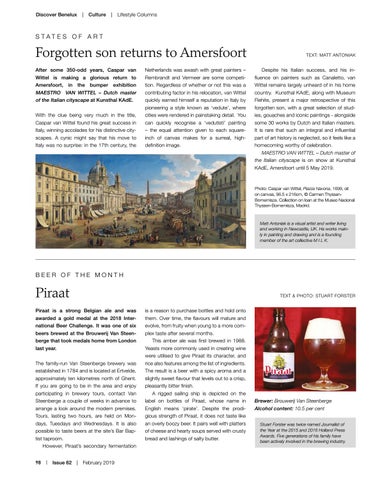 Forgotten son returns to Amersfoort After some 350-odd years, Caspar van Wittel is making a glorious return to Amersfoort, in the bumper exhibition MAESTRO VAN WITTEL – Dutch master of the Italian cityscape at Kunsthal KAdE. With the clue being very much in the title, Caspar van Wittel found his great success in Italy, winning accolades for his distinctive cityscapes. A cynic might say that his move to Italy was no surprise: in the 17th century, the

Netherlands was awash with great painters – Rembrandt and Vermeer are some competition. Regardless of whether or not this was a contributing factor in his relocation, van Wittel quickly earned himself a reputation in Italy by pioneering a style known as ‘vedute’, where cities were rendered in painstaking detail. You can quickly recognise a ‘vedutisti’ painting – the equal attention given to each squareinch of canvas makes for a surreal, highdefinition image.

Despite his Italian success, and his influence on painters such as Canaletto, van Wittel remains largely unheard of in his home country. Kunsthal KAdE, along with Museum Flehite, present a major retrospective of this forgotten son, with a great selection of studies, gouaches and iconic paintings - alongside some 30 works by Dutch and Italian masters. It is rare that such an integral and influential part of art history is neglected, so it feels like a homecoming worthy of celebration. MAESTRO VAN WITTEL – Dutch master of the Italian cityscape is on show at Kunsthal KAdE, Amersfoort until 5 May 2019.

Piraat Piraat is a strong Belgian ale and was awarded a gold medal at the 2018 International Beer Challenge. It was one of six beers brewed at the Brouwerij Van Steenberge that took medals home from London last year. The family-run Van Steenberge brewery was established in 1784 and is located at Ertvelde, approximately ten kilometres north of Ghent. If you are going to be in the area and enjoy participating in brewery tours, contact Van Steenberge a couple of weeks in advance to arrange a look around the modern premises. Tours, lasting two hours, are held on Mondays, Tuesdays and Wednesdays. It is also possible to taste beers at the site’s Bar Baptist taproom. However, Piraat’s secondary fermentation 98  |  Issue 62  |  February 2019

is a reason to purchase bottles and hold onto them. Over time, the flavours will mature and evolve, from fruity when young to a more complex taste after several months. This amber ale was first brewed in 1988. Yeasts more commonly used in creating wine were utilised to give Piraat its character, and rice also features among the list of ingredients. The result is a beer with a spicy aroma and a slightly sweet flavour that levels out to a crisp, pleasantly bitter finish. A rigged sailing ship is depicted on the label on bottles of Piraat, whose name in English means ‘pirate’. Despite the prodigious strength of Piraat, it does not taste like an overly boozy beer. It pairs well with platters of cheese and hearty soups served with crusty bread and lashings of salty butter.

Brewer: Brouwerij Van Steenberge Alcohol content: 10.5 per cent Stuart Forster was twice named Journalist of the Year at the 2015 and 2016 Holland Press Awards. Five generations of his family have been actively involved in the brewing industry.