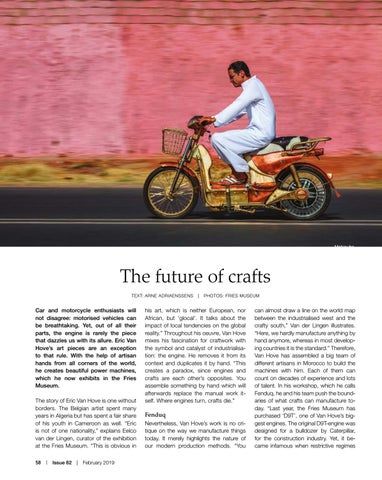 Car and motorcycle enthusiasts will not disagree: motorised vehicles can be breathtaking. Yet, out of all their parts, the engine is rarely the piece that dazzles us with its allure. Eric Van Hove’s art pieces are an exception to that rule. With the help of artisan hands from all corners of the world, he creates beautiful power machines, which he now exhibits in the Fries Museum. The story of Eric Van Hove is one without borders. The Belgian artist spent many years in Algeria but has spent a fair share of his youth in Cameroon as well. “Eric is not of one nationality,” explains Eelco van der Lingen, curator of the exhibition at the Fries Museum. “This is obvious in 58  |  Issue 62  |  February 2019

his art, which is neither European, nor African, but ‘glocal’. It talks about the impact of local tendencies on the global reality.” Throughout his oeuvre, Van Hove mixes his fascination for craftwork with the symbol and catalyst of industrialisation: the engine. He removes it from its context and duplicates it by hand. “This creates a paradox, since engines and crafts are each other’s opposites. You assemble something by hand which will afterwards replace the manual work itself. Where engines turn, crafts die.”

Fenduq Nevertheless, Van Hove’s work is no critique on the way we manufacture things today. It merely highlights the nature of our modern production methods. “You

can almost draw a line on the world map between the industrialised west and the crafty south,” Van der Lingen illustrates. “Here, we hardly manufacture anything by hand anymore, whereas in most developing countries it is the standard.” Therefore, Van Hove has assembled a big team of different artisans in Morocco to build the machines with him. Each of them can count on decades of experience and lots of talent. In his workshop, which he calls Fenduq, he and his team push the boundaries of what crafts can manufacture today. “Last year, the Fries Museum has purchased ‘D9T’, one of Van Hove’s biggest engines. The original D9T-engine was designed for a bulldozer by Caterpillar, for the construction industry. Yet, it became infamous when restrictive regimes