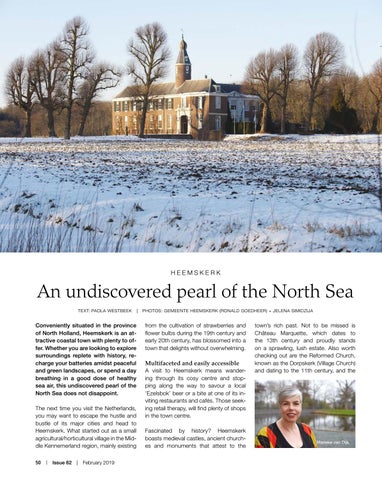 Conveniently situated in the province of North Holland, Heemskerk is an attractive coastal town with plenty to offer. Whether you are looking to explore surroundings replete with history, recharge your batteries amidst peaceful and green landscapes, or spend a day breathing in a good dose of healthy sea air, this undiscovered pearl of the North Sea does not disappoint. The next time you visit the Netherlands, you may want to escape the hustle and bustle of its major cities and head to Heemskerk. What started out as a small agricultural/horticultural village in the Middle Kennemerland region, mainly existing 50  |  Issue 62  |  February 2019

from the cultivation of strawberries and flower bulbs during the 19th century and early 20th century, has blossomed into a town that delights without overwhelming.

Multifaceted and easily accessible A visit to Heemskerk means wandering through its cosy centre and stopping along the way to savour a local ‘Ezelsbok’ beer or a bite at one of its inviting restaurants and cafés. Those seeking retail therapy, will find plenty of shops in the town centre. Fascinated by history? Heemskerk boasts medieval castles, ancient churches and monuments that attest to the

town’s rich past. Not to be missed is Château Marquette, which dates to the 13th century and proudly stands on a sprawling, lush estate. Also worth checking out are the Reformed Church, known as the Dorpskerk (Village Church) and dating to the 11th century, and the