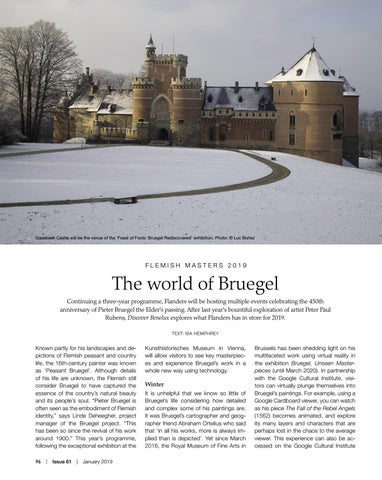 Gaasbeek Castle will be the venue of the ‘Feast of Fools: Bruegel Rediscovered’ exhibition. Photo: © Luc Bohez

The world of Bruegel Continuing a three-year programme, Flanders will be hosting multiple events celebrating the 450th anniversary of Pieter Bruegel the Elder’s passing. After last year’s bountiful exploration of artist Peter Paul Rubens, Discover Benelux explores what Flanders has in store for 2019. TEXT: ISA HEMPHREY

Known partly for his landscapes and depictions of Flemish peasant and country life, the 16th-century painter was known as ‘Peasant Bruegel’. Although details of his life are unknown, the Flemish still consider Bruegel to have captured the essence of the country’s natural beauty and its people’s soul. “Pieter Bruegel is often seen as the embodiment of Flemish identity,” says Linde Deheegher, project manager of the Bruegel project. “This has been so since the revival of his work around 1900.” This year’s programme, following the exceptional exhibition at the 96  |  Issue 61  |  January 2019

Winter It is unhelpful that we know so little of Bruegel’s life considering how detailed and complex some of his paintings are. It was Bruegel’s cartographer and geographer friend Abraham Ortelius who said that ‘in all his works, more is always implied than is depicted’. Yet since March 2016, the Royal Museum of Fine Arts in

Brussels has been shedding light on his multifaceted work using virtual reality in the exhibition Bruegel, Unseen Masterpieces (until March 2020). In partnership with the Google Cultural Institute, visitors can virtually plunge themselves into Bruegel’s paintings. For example, using a Google Cardboard viewer, you can watch as his piece The Fall of the Rebel Angels (1562) becomes animated, and explore its many layers and characters that are perhaps lost in the chaos to the average viewer. This experience can also be accessed on the Google Cultural Institute