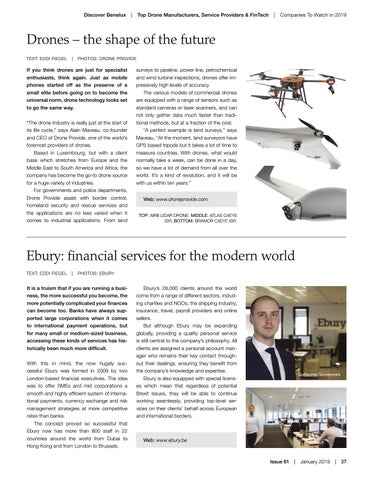 If you think drones are just for specialist enthusiasts, think again. Just as mobile phones started off as the preserve of a small elite before going on to become the universal norm, drone technology looks set to go the same way. “The drone industry is really just at the start of its life cycle,” says Alain Maveau, co-founder and CEO of Drone Provide, one of the world’s foremost providers of drones. Based in Luxembourg, but with a client base which stretches from Europe and the Middle East to South America and Africa, the company has become the go-to drone source for a huge variety of industries. For governments and police departments, Drone Provide assist with border control, homeland security and rescue services and the applications are no less varied when it comes to industrial applications. From land

surveys to pipeline, power line, petrochemical and wind turbine inspections, drones offer impressively high levels of accuracy. The various models of commercial drones are equipped with a range of sensors such as standard cameras or laser scanners, and can not only gather data much faster than traditional methods, but at a fraction of the cost. “A perfect example is land surveys,” says Maveau. “At the moment, land surveyors have GPS based tripods but it takes a lot of time to measure countries. With drones, what would normally take a week, can be done in a day, so we have a lot of demand from all over the world. It’s a kind of revolution, and it will be with us within ten years.” Web: www.droneprovide.com TOP: AIR8 LIDAR DRONE. MIDDLE: ATLAS C4EYE ISR. BOTTOM: BRAMOR C4EYE ISR.

It is a truism that if you are running a business, the more successful you become, the more potentially complicated your finances can become too. Banks have always supported large corporations when it comes to international payment operations, but for many small or medium-sized business, accessing these kinds of services has historically been much more difficult. With this in mind, the now hugely successful Ebury was formed in 2009 by two London-based financial executives. The idea was to offer SMEs and mid corporations a smooth and highly efficient system of international payments, currency exchange and risk management strategies at more competitive rates than banks. The concept proved so successful that Ebury now has more than 800 staff in 22 countries around the world from Dubai to Hong Kong and from London to Brussels.

Ebury’s 28,000 clients around the world come from a range of different sectors, including charities and NGOs, the shipping industry, insurance, travel, payroll providers and online sellers. But although Ebury may be expanding globally, providing a quality personal service is still central to the company’s philosophy. All clients are assigned a personal account manager who remains their key contact throughout their dealings, ensuring they benefit from the company’s knowledge and expertise. Ebury is also equipped with special licenses which mean that regardless of potential Brexit issues, they will be able to continue working seamlessly, providing top-level services on their clients’ behalf across European and international borders.