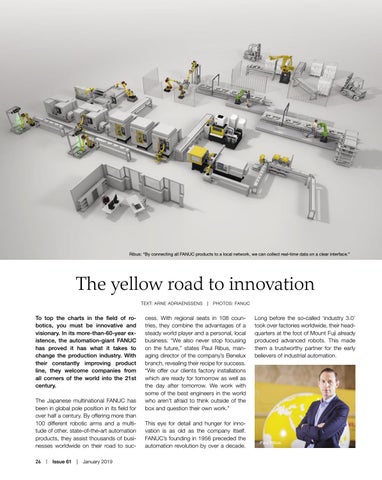 Discover Benelux  |  Flemish Drone Industry, (Industrial) Robotics & Automation Technology  |  When Only The Best Will Do

Ribus: “By connecting all FANUC products to a local network, we can collect real-time data on a clear interface.”

To top the charts in the field of robotics, you must be innovative and visionary. In its more-than-60-year existence, the automation-giant FANUC has proved it has what it takes to change the production industry. With their constantly improving product line, they welcome companies from all corners of the world into the 21st century. The Japanese multinational FANUC has been in global pole position in its field for over half a century. By offering more than 100 different robotic arms and a multitude of other, state-of-the-art automation products, they assist thousands of businesses worldwide on their road to suc26  |  Issue 61  |  January 2019

cess. With regional seats in 108 countries, they combine the advantages of a steady world player and a personal, local business. “We also never stop focusing on the future,” states Paul Ribus, managing director of the company’s Benelux branch, revealing their recipe for success. “We offer our clients factory installations which are ready for tomorrow as well as the day after tomorrow. We work with some of the best engineers in the world who aren’t afraid to think outside of the box and question their own work.” This eye for detail and hunger for innovation is as old as the company itself. FANUC’s founding in 1956 preceded the automation revolution by over a decade.

Long before the so-called ‘industry 3.0’ took over factories worldwide, their headquarters at the foot of Mount Fuji already produced advanced robots. This made them a trustworthy partner for the early believers of industrial automation.