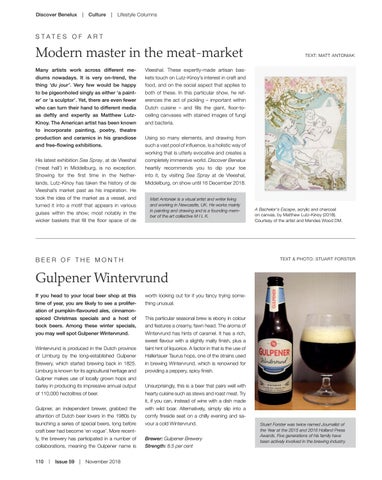 Modern master in the meat-market Many artists work across different mediums nowadays. It is very on-trend, the thing ‘du jour’. Very few would be happy to be pigeonholed singly as either ‘a painter’ or ‘a sculptor’. Yet, there are even fewer who can turn their hand to different media as deftly and expertly as Matthew LutzKinoy. The American artist has been known to incorporate painting, poetry, theatre production and ceramics in his grandiose and free-flowing exhibitions. His latest exhibition Sea Spray, at de Vleeshal (‘meat hall’) in Middelburg, is no exception. Showing for the first time in the Netherlands, Lutz-Kinoy has taken the history of de Vleeshal’s market past as his inspiration. He took the idea of the market as a vessel, and turned it into a motif that appears in various guises within the show; most notably in the wicker baskets that fill the floor space of de

Vleeshal. These expertly-made artisan baskets touch on Lutz-Kinoy’s interest in craft and food, and on the social aspect that applies to both of these. In this particular show, he references the act of pickling – important within Dutch cuisine – and fills the giant, floor-toceiling canvases with stained images of fungi and bacteria. Using so many elements, and drawing from such a vast pool of influence, is a holistic way of working that is utterly evocative and creates a completely immersive world. Discover Benelux heartily recommends you to dip your toe into it, by visiting Sea Spray at de Vleeshal, Middelburg, on show until 16 December 2018. Matt Antoniak is a visual artist and writer living and working in Newcastle, UK. He works mainly in painting and drawing and is a founding member of the art collective M I L K.

A Bachelor&#39;s Escape, acrylic and charcoal on canvas, by Matthew Lutz-Kinoy (2018). Courtesy of the artist and Mendes Wood DM.

Gulpener Wintervrund If you head to your local beer shop at this time of year, you are likely to see a proliferation of pumpkin-flavoured ales, cinnamonspiced Christmas specials and a host of bock beers. Among these winter specials, you may well spot Gulpener Wintervrund. Wintervrund is produced in the Dutch province of Limburg by the long-established Gulpener Brewery, which started brewing back in 1825. Limburg is known for its agricultural heritage and Gulpner makes use of locally grown hops and barley in producing its impressive annual output of 110,000 hectolitres of beer. Gulpner, an independent brewer, grabbed the attention of Dutch beer lovers in the 1980s by launching a series of special beers, long before craft beer had become ‘en vogue’. More recently, the brewery has participated in a number of collaborations, meaning the Gulpener name is 110  |  Issue 59  |  November 2018

worth looking out for if you fancy trying something unusual. This particular seasonal brew is ebony in colour and features a creamy, fawn head. The aroma of Wintervrund has hints of caramel. It has a rich, sweet flavour with a slightly malty finish, plus a faint hint of liquorice. A factor in that is the use of Hallertauer Taurus hops, one of the strains used in brewing Wintervrund, which is renowned for providing a peppery, spicy finish. Unsurprisingly, this is a beer that pairs well with hearty cuisine such as stews and roast meat. Try it, if you can, instead of wine with a dish made with wild boar. Alternatively, simply slip into a comfy fireside seat on a chilly evening and savour a cold Wintervrund. Brewer: Gulpener Brewery Strength: 8.5 per cent