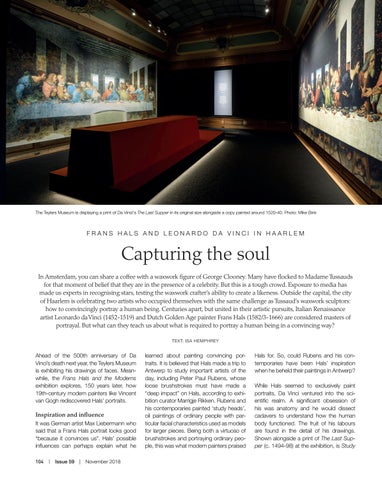 The Teylers Museum is displaying a print of Da Vinci&#39;s The Last Supper in its original size alongside a copy painted around 1520-40. Photo: Mike Bink

Capturing the soul In Amsterdam, you can share a coffee with a waxwork figure of George Clooney. Many have flocked to Madame Tussauds for that moment of belief that they are in the presence of a celebrity. But this is a tough crowd. Exposure to media has made us experts in recognising stars, testing the waxwork crafter’s ability to create a likeness. Outside the capital, the city of Haarlem is celebrating two artists who occupied themselves with the same challenge as Tussaud’s waxwork sculptors: how to convincingly portray a human being. Centuries apart, but united in their artistic pursuits, Italian Renaissance artist Leonardo da Vinci (1452-1519) and Dutch Golden Age painter Frans Hals (1582/3-1666) are considered masters of portrayal. But what can they teach us about what is required to portray a human being in a convincing way? TEXT: ISA HEMPHREY

Ahead of the 500th anniversary of Da Vinci’s death next year, the Teylers Museum is exhibiting his drawings of faces. Meanwhile, the Frans Hals and the Moderns exhibition explores, 150 years later, how 19th-century modern painters like Vincent van Gogh rediscovered Hals’ portraits.

Inspiration and influence It was German artist Max Liebermann who said that a Frans Hals portrait looks good “because it convinces us”. Hals’ possible influences can perhaps explain what he 104  |  Issue 59  |  November 2018

learned about painting convincing portraits. It is believed that Hals made a trip to Antwerp to study important artists of the day, including Peter Paul Rubens, whose loose brushstrokes must have made a “deep impact” on Hals, according to exhibition curator Marrigje Rikken. Rubens and his contemporaries painted ‘study heads’, oil paintings of ordinary people with particular facial characteristics used as models for larger pieces. Being both a virtuoso of brushstrokes and portraying ordinary people, this was what modern painters praised

Hals for. So, could Rubens and his contemporaries have been Hals’ inspiration when he beheld their paintings in Antwerp? While Hals seemed to exclusively paint portraits, Da Vinci ventured into the scientific realm. A significant obsession of his was anatomy and he would dissect cadavers to understand how the human body functioned. The fruit of his labours are found in the detail of his drawings. Shown alongside a print of The Last Supper (c. 1494-98) at the exhibition, is Study