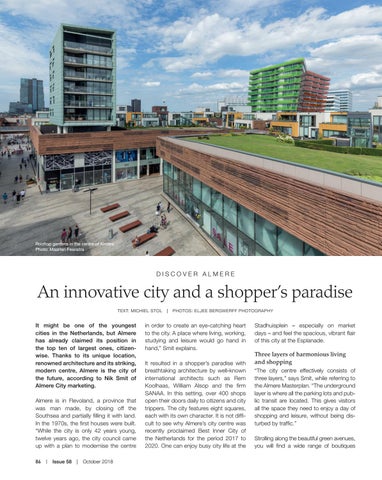 Rooftop gardens in the centre of Almere. Photo: Maarten Feenstra

It might be one of the youngest cities in the Netherlands, but Almere has already claimed its position in the top ten of largest ones, citizenwise. Thanks to its unique location, renowned architecture and its striking, modern centre, Almere is the city of the future, according to Nik Smit of Almere City marketing. Almere is in Flevoland, a province that was man made, by closing off the Southsea and partially filling it with land. In the 1970s, the first houses were built. “While the city is only 42 years young, twelve years ago, the city council came up with a plan to modernise the centre 86  |  Issue 58  |  October 2018

in order to create an eye-catching heart to the city. A place where living, working, studying and leisure would go hand in hand,” Smit explains. It resulted in a shopper’s paradise with breathtaking architecture by well-known international architects such as Rem Koolhaas, William Alsop and the firm SANAA. In this setting, over 400 shops open their doors daily to citizens and city trippers. The city features eight squares, each with its own character. It is not difficult to see why Almere’s city centre was recently proclaimed Best Inner City of the Netherlands for the period 2017 to 2020. One can enjoy busy city life at the

Stadhuisplein – especially on market days – and feel the spacious, vibrant flair of this city at the Esplanade.

Three layers of harmonious living and shopping “The city centre effectively consists of three layers,” says Smit, while referring to the Almere Masterplan. “The underground layer is where all the parking lots and public transit are located. This gives visitors all the space they need to enjoy a day of shopping and leisure, without being disturbed by traffic.” Strolling along the beautiful green avenues, you will find a wide range of boutiques