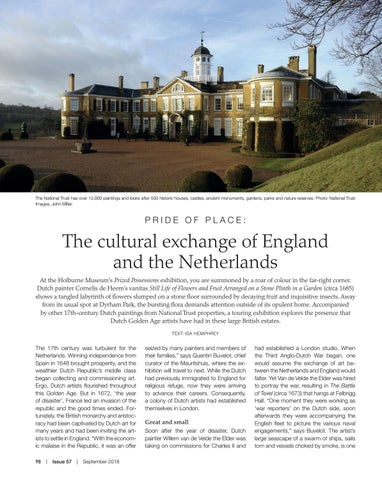 The cultural exchange of England and the Netherlands At the Holburne Museum’s Prized Possessions exhibition, you are summoned by a roar of colour in the far-right corner. Dutch painter Cornelis de Heem’s vanitas Still Life of Flowers and Fruit Arranged on a Stone Plinth in a Garden (circa 1685) shows a tangled labyrinth of flowers slumped on a stone floor surrounded by decaying fruit and inquisitive insects. Away from its usual spot at Dyrham Park, the bursting flora demands attention outside of its opulent home. Accompanied by other 17th-century Dutch paintings from National Trust properties, a touring exhibition explores the presence that Dutch Golden Age artists have had in these large British estates. TEXT: ISA HEMPHREY

The 17th century was turbulent for the Netherlands. Winning independence from Spain in 1648 brought prosperity, and the wealthier Dutch Republic’s middle class began collecting and commissioning art. Ergo, Dutch artists flourished throughout this Golden Age. But in 1672, ‘the year of disaster’, France led an invasion of the republic and the good times ended. Fortunately, the British monarchy and aristocracy had been captivated by Dutch art for many years and had been inviting the artists to settle in England. “With the economic malaise in the Republic, it was an offer 98  |  Issue 57  |  September 2018

seized by many painters and members of their families,” says Quentin Buvelot, chief curator of the Mauritshuis, where the exhibition will travel to next. While the Dutch had previously immigrated to England for religious refuge, now they were arriving to advance their careers. Consequently, a colony of Dutch artists had established themselves in London.

Great and small Soon after the year of disaster, Dutch painter Willem van de Velde the Elder was taking on commissions for Charles II and

had established a London studio. When the Third Anglo-Dutch War began, one would assume the exchange of art between the Netherlands and England would falter. Yet Van de Velde the Elder was hired to portray the war, resulting in The Battle of Texel (circa 1673) that hangs at Felbrigg Hall. “One moment they were working as ‘war reporters’ on the Dutch side, soon afterwards they were accompanying the English fleet to picture the various naval engagements,” says Buvelot. The artist’s large seascape of a swarm of ships, sails torn and vessels choked by smoke, is one