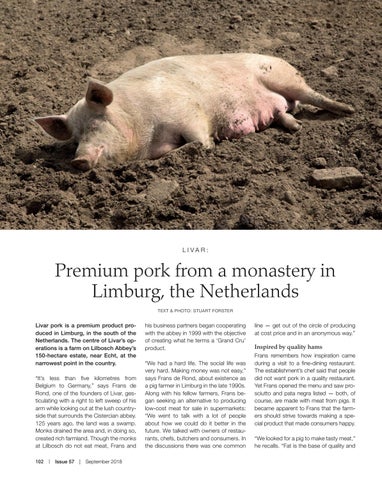 Livar pork is a premium product produced in Limburg, in the south of the Netherlands. The centre of Livar’s operations is a farm on Lilbosch Abbey’s 150-hectare estate, near Echt, at the narrowest point in the country. “It’s less than five kilometres from Belgium to Germany,” says Frans de Rond, one of the founders of Livar, gesticulating with a right to left sweep of his arm while looking out at the lush countryside that surrounds the Cistercian abbey. 125 years ago, the land was a swamp. Monks drained the area and, in doing so, created rich farmland. Though the monks at Lilbosch do not eat meat, Frans and 102  |  Issue 57  |  September 2018

his business partners began cooperating with the abbey in 1999 with the objective of creating what he terms a ‘Grand Cru’ product. “We had a hard life. The social life was very hard. Making money was not easy,” says Frans de Rond, about existence as a pig farmer in Limburg in the late 1990s. Along with his fellow farmers, Frans began seeking an alternative to producing low-cost meat for sale in supermarkets: “We went to talk with a lot of people about how we could do it better in the future. We talked with owners of restaurants, chefs, butchers and consumers. In the discussions there was one common

line — get out of the circle of producing at cost price and in an anonymous way.”

Inspired by quality hams Frans remembers how inspiration came during a visit to a fine-dining restaurant. The establishment’s chef said that people did not want pork in a quality restaurant. Yet Frans opened the menu and saw prosciutto and pata negra listed — both, of course, are made with meat from pigs. It became apparent to Frans that the farmers should strive towards making a special product that made consumers happy. “We looked for a pig to make tasty meat,” he recalls. “Fat is the base of quality and