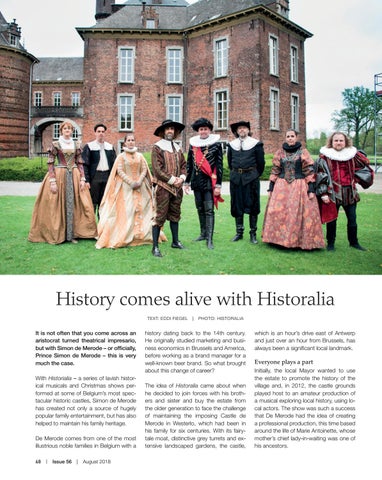 It is not often that you come across an aristocrat turned theatrical impresario, but with Simon de Merode – or officially, Prince Simon de Merode – this is very much the case. With Historialia – a series of lavish historical musicals and Christmas shows performed at some of Belgium’s most spectacular historic castles, Simon de Merode has created not only a source of hugely popular family entertainment, but has also helped to maintain his family heritage. De Merode comes from one of the most illustrious noble families in Belgium with a 68  |  Issue 56  |  August 2018

history dating back to the 14th century. He originally studied marketing and business economics in Brussels and America, before working as a brand manager for a well-known beer brand. So what brought about this change of career? The idea of Historalia came about when he decided to join forces with his brothers and sister and buy the estate from the older generation to face the challenge of maintaining the imposing Castle de Merode in Westerlo, which had been in his family for six centuries. With its fairytale moat, distinctive grey turrets and extensive landscaped gardens, the castle,

which is an hour’s drive east of Antwerp and just over an hour from Brussels, has always been a significant local landmark.

Everyone plays a part Initially, the local Mayor wanted to use the estate to promote the history of the village and, in 2012, the castle grounds played host to an amateur production of a musical exploring local history, using local actors. The show was such a success that De Merode had the idea of creating a professional production, this time based around the life of Marie Antoinette, whose mother’s chief lady-in-waiting was one of his ancestors.