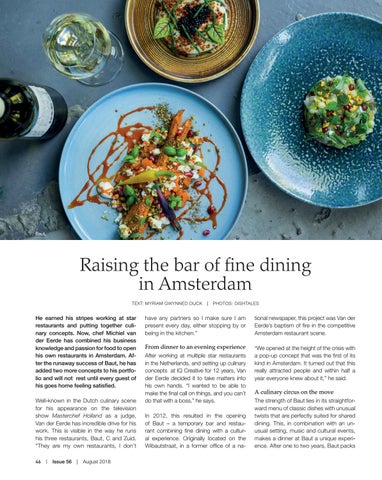 He earned his stripes working at star restaurants and putting together culinary concepts. Now, chef Michiel van der Eerde has combined his business knowledge and passion for food to open his own restaurants in Amsterdam. After the runaway success of Baut, he has added two more concepts to his portfolio and will not rest until every guest of his goes home feeling satisfied. Well-known in the Dutch culinary scene for his appearance on the television show Masterchef Holland as a judge, Van der Eerde has incredible drive for his work. This is visible in the way he runs his three restaurants, Baut, C and Zuid. “They are my own restaurants, I don’t 46  |  Issue 56  |  August 2018

have any partners so I make sure I am present every day, either stopping by or being in the kitchen.”

From dinner to an evening experience

“We opened at the height of the crisis with a pop-up concept that was the first of its kind in Amsterdam. It turned out that this really attracted people and within half a year everyone knew about it,” he said.

After working at multiple star restaurants in the Netherlands, and setting up culinary concepts at IQ Creative for 12 years, Van der Eerde decided it to take matters into his own hands. “I wanted to be able to make the final call on things, and you can’t do that with a boss,” he says. In 2012, this resulted in the opening of Baut – a temporary bar and restaurant combining fine dining with a cultural experience. Originally located on the Wibautstraat, in a former office of a na-

A culinary circus on the move The strength of Baut lies in its straightforward menu of classic dishes with unusual twists that are perfectly suited for shared dining. This, in combination with an unusual setting, music and cultural events, makes a dinner at Baut a unique experience. After one to two years, Baut packs