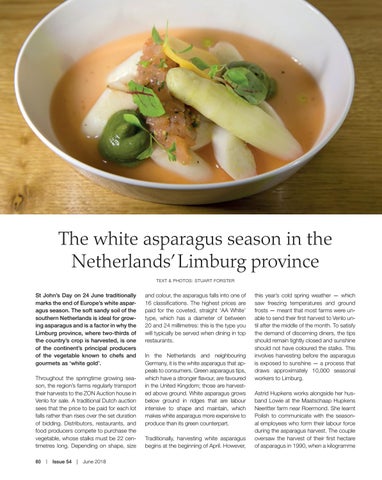 St John’s Day on 24 June traditionally marks the end of Europe’s white asparagus season. The soft sandy soil of the southern Netherlands is ideal for growing asparagus and is a factor in why the Limburg province, where two-thirds of the country’s crop is harvested, is one of the continent’s principal producers of the vegetable known to chefs and gourmets as ‘white gold’. Throughout the springtime growing season, the region’s farms regularly transport their harvests to the ZON Auction house in Venlo for sale. A traditional Dutch auction sees that the price to be paid for each lot falls rather than rises over the set duration of bidding. Distributors, restaurants, and food producers compete to purchase the vegetable, whose stalks must be 22 centimetres long. Depending on shape, size 80  |  Issue 54  |  June 2018

and colour, the asparagus falls into one of 16 classifications. The highest prices are paid for the coveted, straight ‘AA White’ type, which has a diameter of between 20 and 24 millimetres: this is the type you will typically be served when dining in top restaurants. In the Netherlands and neighbouring Germany, it is the white asparagus that appeals to consumers. Green asparagus tips, which have a stronger flavour, are favoured in the United Kingdom; those are harvested above ground. White asparagus grows below ground in ridges that are labour intensive to shape and maintain, which makes white asparagus more expensive to produce than its green counterpart. Traditionally, harvesting white asparagus begins at the beginning of April. However,

this year’s cold spring weather — which saw freezing temperatures and ground frosts — meant that most farms were unable to send their first harvest to Venlo until after the middle of the month. To satisfy the demand of discerning diners, the tips should remain tightly closed and sunshine should not have coloured the stalks. This involves harvesting before the asparagus is exposed to sunshine — a process that draws approximately 10,000 seasonal workers to Limburg. Astrid Hupkens works alongside her husband Lowie at the Maatschaap Hupkens Neeritter farm near Roermond. She learnt Polish to communicate with the seasonal employees who form their labour force during the asparagus harvest. The couple oversaw the harvest of their first hectare of asparagus in 1990, when a kilogramme