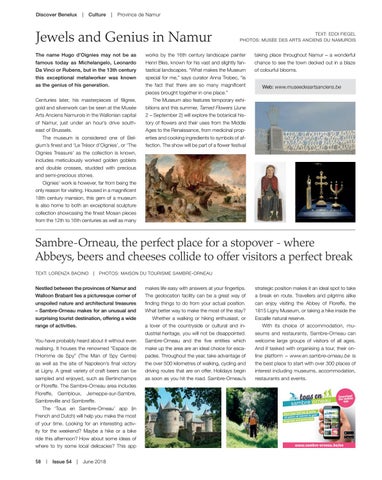 Jewels and Genius in Namur The name Hugo d’Oignies may not be as famous today as Michelangelo, Leonardo Da Vinci or Rubens, but in the 13th century this exceptional metalworker was known as the genius of his generation. Centuries later, his masterpieces of filigree, gold and silverwork can be seen at the Musée Arts Anciens Namurois in the Wallonian capital of Namur, just under an hour’s drive southeast of Brussels. The museum is considered one of Belgium’s finest and ‘Le Trésor d’Oignies’, or ‘The Oignies Treasure’ as the collection is known, includes meticulously worked golden goblets and double crosses, studded with precious and semi-precious stones. Oignies’ work is however, far from being the only reason for visiting. Housed in a magnificent 18th century mansion, this gem of a museum is also home to both an exceptional sculpture collection showcasing the finest Mosan pieces from the 12th to 16th centuries as well as many

works by the 16th century landscape painter Henri Bles, known for his vast and slightly fantastical landscapes. “What makes the Museum special for me,” says curator Anna Trobec, “is the fact that there are so many magnificent pieces brought together in one place.” The Museum also features temporary exhibitions and this summer, Tamed Flowers (June 2 – September 2) will explore the botanical history of flowers and their uses from the Middle Ages to the Renaissance, from medicinal properties and cooking ingredients to symbols of affection. The show will be part of a flower festival

taking place throughout Namur – a wonderful chance to see the town decked out in a blaze of colourful blooms. Web: www.museedesartsanciens.be

Nestled between the provinces of Namur and Walloon Brabant lies a picturesque corner of unspoiled nature and architectural treasures – Sambre-Orneau makes for an unusual and surprising tourist destination, offering a wide range of activities. You have probably heard about it without even realising. It houses the renowned “Espace de l’Homme de Spy” (The Man of Spy Centre) as well as the site of Napoleon’s final victory at Ligny. A great variety of craft beers can be sampled and enjoyed, such as Bertinchamps or Floreffe. The Sambre-Orneau area includes Floreffe, Gembloux, Jemeppe-sur-Sambre, Sambreville and Sombreffe. The ‘Tous en Sambre-Orneau’ app (in French and Dutch) will help you make the most of your time. Looking for an interesting activity for the weekend? Maybe a hike or a bike ride this afternoon? How about some ideas of where to try some local delicacies? This app 58  |  Issue 54  |  June 2018

makes life easy with answers at your fingertips. The geolocation facility can be a great way of finding things to do from your actual position. What better way to make the most of the stay? Whether a walking or hiking enthusiast, or a lover of the countryside or cultural and industrial heritage, you will not be disappointed. Sambre-Orneau and the five entities which make up the area are an ideal choice for escapades. Throughout the year, take advantage of the over 500 kilometres of walking, cycling and driving routes that are on offer. Holidays begin as soon as you hit the road. Sambre-Orneau’s

strategic position makes it an ideal spot to take a break en route. Travellers and pilgrims alike can enjoy visiting the Abbey of Floreffe, the 1815 Ligny Museum, or taking a hike inside the Escaille natural reserve. With its choice of accommodation, museums and restaurants, Sambre-Orneau can welcome large groups of visitors of all ages. And if tasked with organising a tour, their online platform – www.en.sambre-orneau.be is the best place to start with over 300 places of interest including museums, accommodation, restaurants and events.