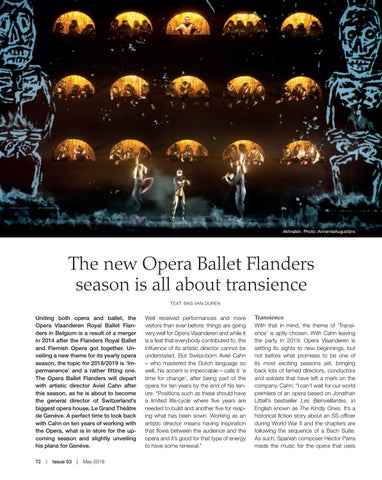 Uniting both opera and ballet, the Opera Vlaanderen Royal Ballet Flanders in Belgium is a result of a merger in 2014 after the Flanders Royal Ballet and Flemish Opera got together. Unveiling a new theme for its yearly opera season, the topic for 2018/2019 is ‘Impermanence’ and a rather fitting one. The Opera Ballet Flanders will depart with artistic director Aviel Cahn after this season, as he is about to become the general director of Switzerland’s biggest opera house, Le Grand Théâtre de Genève. A perfect time to look back with Cahn on ten years of working with the Opera, what is in store for the upcoming season and slightly unveiling his plans for Genève. 72  |  Issue 53  |  May 2018

Well received performances and more visitors than ever before: things are going very well for Opera Vlaanderen and while it is a feat that everybody contributed to, the influence of its artistic director cannot be understated. But Swiss-born Aviel Cahn – who mastered the Dutch language so well, his accent is impeccable – calls it ‘a time for change’, after being part of the opera for ten years by the end of his tenure. “Positions such as these should have a limited life-cycle where five years are needed to build and another five for reaping what has been sown. Working as an artistic director means having inspiration that flows between the audience and the opera and it’s good for that type of energy to have some renewal.”

Transience With that in mind, the theme of ‘Transience’ is aptly chosen. With Cahn leaving the party in 2019, Opera Vlaanderen is setting its sights to new beginnings, but not before what promises to be one of its most exciting seasons yet, bringing back lots of famed directors, conductors and soloists that have left a mark on the company. Cahn: “I can’t wait for our world premiere of an opera based on Jonathan Littell’s bestseller Les Bienveillantes, in English known as The Kindly Ones. It’s a historical fiction story about an SS officer during World War II and the chapters are following the sequence of a Bach Suite. As such, Spanish composer Hèctor Parra made the music for the opera that uses