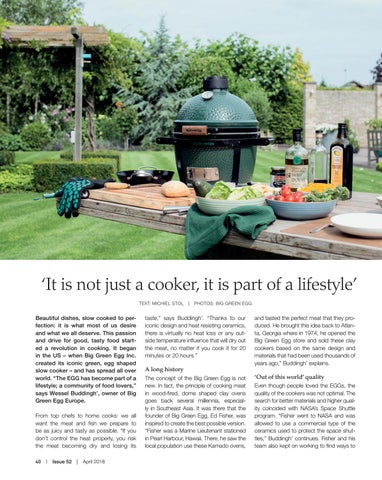 ‘It is not just a cooker, it is part of a lifestyle’ TEXT: MICHIEL STOL  |  PHOTOS: BIG GREEN EGG

Beautiful dishes, slow cooked to perfection: it is what most of us desire and what we all deserve. This passion and drive for good, tasty food started a revolution in cooking. It began in the US – when Big Green Egg Inc. created its iconic green, egg shaped slow cooker – and has spread all over world. “The EGG has become part of a lifestyle; a community of food lovers,” says Wessel Buddingh’, owner of Big Green Egg Europe. From top chefs to home cooks: we all want the meat and fish we prepare to be as juicy and tasty as possible. “If you don’t control the heat properly, you risk the meat becoming dry and losing its 40  |  Issue 52  |  April 2018

taste,” says Buddingh’. “Thanks to our iconic design and heat resisting ceramics, there is virtually no heat loss or any outside temperature influence that will dry out the meat, no matter if you cook it for 20 minutes or 20 hours.”

A long history The concept of the Big Green Egg is not new. In fact, the principle of cooking meat in wood-fired, dome shaped clay ovens goes back several millennia, especially in Southeast Asia. It was there that the founder of Big Green Egg, Ed Fisher, was inspired to create the best possible version. “Fisher was a Marine Lieutenant stationed in Pearl Harbour, Hawaii. There, he saw the local population use these Kamado ovens,

and tasted the perfect meat that they produced. He brought this idea back to Atlanta, Georgia where in 1974, he opened the Big Green Egg store and sold these clay cookers based on the same design and materials that had been used thousands of years ago,” Buddingh’ explains.

‘Out of this world’ quality Even though people loved the EGGs, the quality of the cookers was not optimal. The search for better materials and higher quality coincided with NASA’s Space Shuttle program. “Fisher went to NASA and was allowed to use a commercial type of the ceramics used to protect the space shuttles,” Buddingh’ continues. Fisher and his team also kept on working to find ways to