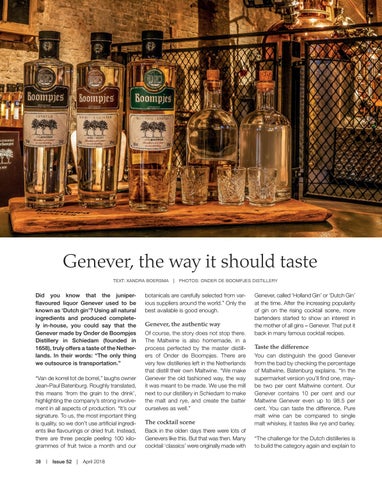 Did you know that the juniperflavoured liquor Genever used to be known as ‘Dutch gin’? Using all natural ingredients and produced completely in-house, you could say that the Genever made by Onder de Boompjes Distillery in Schiedam (founded in 1658), truly offers a taste of the Netherlands. In their words: “The only thing we outsource is transportation.” “Van de korrel tot de borrel,” laughs owner Jean-Paul Batenburg. Roughly translated, this means ‘from the grain to the drink’, highlighting the company’s strong involvement in all aspects of production. “It’s our signature. To us, the most important thing is quality, so we don’t use artificial ingredients like flavourings or dried fruit. Instead, there are three people peeling 100 kilogrammes of fruit twice a month and our 38  |  Issue 52  |  April 2018

botanicals are carefully selected from various suppliers around the world.” Only the best available is good enough.

Genever, the authentic way Of course, the story does not stop there. The Maltwine is also homemade, in a process perfected by the master distillers of Onder de Boompjes. There are very few distilleries left in the Netherlands that distill their own Maltwine. “We make Genever the old fashioned way, the way it was meant to be made. We use the mill next to our distillery in Schiedam to make the malt and rye, and create the batter ourselves as well.”

Genever, called ‘Holland Gin’ or ‘Dutch Gin’ at the time. After the increasing popularity of gin on the rising cocktail scene, more bartenders started to show an interest in the mother of all gins – Genever. That put it back in many famous cocktail recipes.

You can distinguish the good Genever from the bad by checking the percentage of Maltwine, Batenburg explains. “In the supermarket version you’ll find one, maybe two per cent Maltwine content. Our Genever contains 10 per cent and our Maltwine Genever even up to 98.5 per cent. You can taste the difference. Pure malt wine can be compared to single malt whiskey, it tastes like rye and barley.

Back in the olden days there were lots of Genevers like this. But that was then. Many cocktail ‘classics’ were originally made with