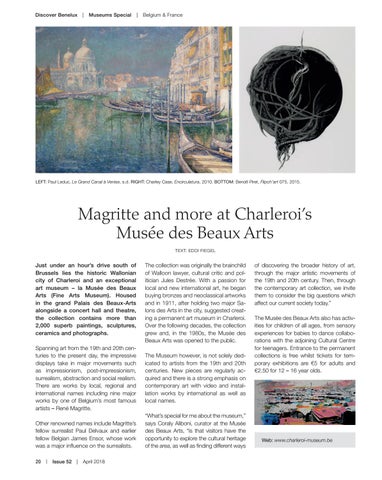 Just under an hour’s drive south of Brussels lies the historic Wallonian city of Charleroi and an exceptional art museum – la Musée des Beaux Arts (Fine Arts Museum). Housed in the grand Palais des Beaux-Arts alongside a concert hall and theatre, the collection contains more than 2,000 superb paintings, sculptures, ceramics and photographs. Spanning art from the 19th and 20th centuries to the present day, the impressive displays take in major movements such as impressionism, post-impressionism, surrealism, abstraction and social realism. There are works by local, regional and international names including nine major works by one of Belgium’s most famous artists – René Magritte. Other renowned names include Magritte’s fellow surrealist Paul Delvaux and earlier fellow Belgian James Ensor, whose work was a major influence on the surrealists. 20  |  Issue 52  |  April 2018

The collection was originally the brainchild of Walloon lawyer, cultural critic and politician Jules Destrée. With a passion for local and new international art, he began buying bronzes and neoclassical artworks and in 1911, after holding two major Salons des Arts in the city, suggested creating a permanent art museum in Charleroi. Over the following decades, the collection grew and, in the 1980s, the Musée des Beaux Arts was opened to the public. The Museum however, is not solely dedicated to artists from the 19th and 20th centuries. New pieces are regularly acquired and there is a strong emphasis on contemporary art with video and installation works by international as well as local names. “What’s special for me about the museum,” says Coraly Aliboni, curator at the Musée des Beaux Arts, “is that visitors have the opportunity to explore the cultural heritage of the area, as well as finding different ways

of discovering the broader history of art, through the major artistic movements of the 19th and 20th century. Then, through the contemporary art collection, we invite them to consider the big questions which affect our current society today.” The Musée des Beaux Arts also has activities for children of all ages, from sensory experiences for babies to dance collaborations with the adjoining Cultural Centre for teenagers. Entrance to the permanent collections is free whilst tickets for temporary exhibitions are €5 for adults and €2.50 for 12 – 16 year olds.