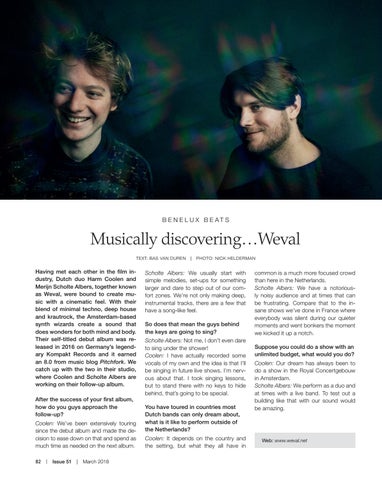 Having met each other in the film industry, Dutch duo Harm Coolen and Merijn Scholte Albers, together known as Weval, were bound to create music with a cinematic feel. With their blend of minimal techno, deep house and krautrock, the Amsterdam-based synth wizards create a sound that does wonders for both mind and body. Their self-titled debut album was released in 2016 on Germany’s legendary Kompakt Records and it earned an 8.0 from music blog Pitchfork. We catch up with the two in their studio, where Coolen and Scholte Albers are working on their follow-up album. After the success of your first album, how do you guys approach the follow-up? Coolen: We’ve been extensively touring since the debut album and made the decision to ease down on that and spend as much time as needed on the next album. 82  |  Issue 51  |  March 2018

Scholte Albers: We usually start with simple melodies, set-ups for something larger and dare to step out of our comfort zones. We’re not only making deep, instrumental tracks, there are a few that have a song-like feel. So does that mean the guys behind the keys are going to sing? Scholte Albers: Not me, I don’t even dare to sing under the shower! Coolen: I have actually recorded some vocals of my own and the idea is that I’ll be singing in future live shows. I’m nervous about that. I took singing lessons, but to stand there with no keys to hide behind, that’s going to be special. You have toured in countries most Dutch bands can only dream about, what is it like to perform outside of the Netherlands? Coolen: It depends on the country and the setting, but what they all have in

common is a much more focused crowd than here in the Netherlands. Scholte Albers: We have a notoriously noisy audience and at times that can be frustrating. Compare that to the insane shows we’ve done in France where everybody was silent during our quieter moments and went bonkers the moment we kicked it up a notch. Suppose you could do a show with an unlimited budget, what would you do? Coolen: Our dream has always been to do a show in the Royal Concertgebouw in Amsterdam. Scholte Albers: We perform as a duo and at times with a live band. To test out a building like that with our sound would be amazing.