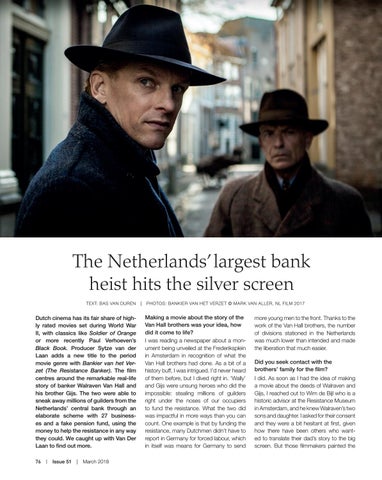 Dutch cinema has its fair share of highly rated movies set during World War II, with classics like Soldier of Orange or more recently Paul Verhoeven’s Black Book. Producer Sytze van der Laan adds a new title to the period movie genre with Bankier van het Verzet (The Resistance Banker). The film centres around the remarkable real-life story of banker Walraven Van Hall and his brother Gijs. The two were able to sneak away millions of guilders from the Netherlands’ central bank through an elaborate scheme with 27 businesses and a fake pension fund, using the money to help the resistance in any way they could. We caught up with Van Der Laan to find out more. 76  |  Issue 51  |  March 2018

Making a movie about the story of the Van Hall brothers was your idea, how did it come to life? I was reading a newspaper about a monument being unveiled at the Frederiksplein in Amsterdam in recognition of what the Van Hall brothers had done. As a bit of a history buff, I was intrigued. I’d never heard of them before, but I dived right in. ‘Wally’ and Gijs were unsung heroes who did the impossible: stealing millions of guilders right under the noses of our occupiers to fund the resistance. What the two did was impactful in more ways than you can count. One example is that by funding the resistance, many Dutchmen didn’t have to report in Germany for forced labour, which in itself was means for Germany to send

more young men to the front. Thanks to the work of the Van Hall brothers, the number of divisions stationed in the Netherlands was much lower than intended and made the liberation that much easier. Did you seek contact with the brothers’ family for the film? I did. As soon as I had the idea of making a movie about the deeds of Walraven and Gijs, I reached out to Wim de Bijl who is a historic advisor at the Resistance Museum in Amsterdam, and he knew Walraven’s two sons and daughter. I asked for their consent and they were a bit hesitant at first, given how there have been others who wanted to translate their dad’s story to the big screen. But those filmmakers painted the