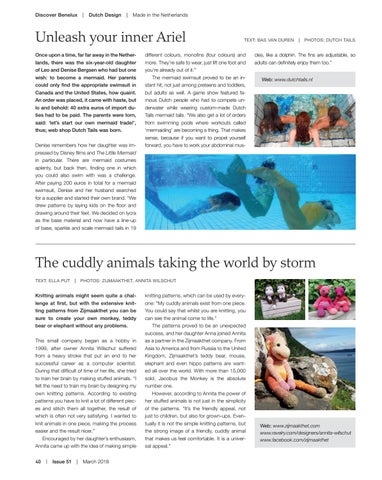 Unleash your inner Ariel Once upon a time, far far away in the Netherlands, there was the six-year-old daughter of Leo and Denise Bergsen who had but one wish: to become a mermaid. Her parents could only find the appropriate swimsuit in Canada and the United States, how quaint. An order was placed, it came with haste, but lo and behold: 40 extra euros of import duties had to be paid. The parents were torn, said: ‘let’s start our own mermaid trade!’, thus; web shop Dutch Tails was born. Denise remembers how her daughter was impressed by Disney films and The Little Mermaid in particular. There are mermaid costumes aplenty, but back then, finding one in which you could also swim with was a challenge. After paying 200 euros in total for a mermaid swimsuit, Denise and her husband searched for a supplier and started their own brand. “We drew patterns by laying kids on the floor and drawing around their feet. We decided on lycra as the base material and now have a line-up of base, sparkle and scale mermaid tails in 19

different colours, monofins (four colours) and more. They’re safe to wear, just lift one foot and you’re already out of it.” The mermaid swimsuit proved to be an instant hit, not just among preteens and toddlers, but adults as well. A game show featured famous Dutch people who had to compete underwater while wearing custom-made Dutch Tails mermaid tails. “We also get a lot of orders from swimming pools where workouts called ‘mermaiding’ are becoming a thing. That makes sense, because if you want to propel yourself forward, you have to work your abdominal mus-

cles, like a dolphin. The fins are adjustable, so adults can definitely enjoy them too.” Web: www.dutchtails.nl

Knitting animals might seem quite a challenge at first, but with the extensive knitting patterns from Zijmaakthet you can be sure to create your own monkey, teddy bear or elephant without any problems. This small company began as a hobby in 1999, after owner Annita Wilschut suffered from a heavy stroke that put an end to her successful career as a computer scientist. During that difficult of time of her life, she tried to train her brain by making stuffed animals. “I felt the need to train my brain by designing my own knitting patterns. According to existing patterns you have to knit a lot of different pieces and stitch them all together, the result of which is often not very satisfying. I wanted to knit animals in one piece, making the process easier and the result nicer.” Encouraged by her daughter’s enthusiasm, Annita came up with the idea of making simple 40  |  Issue 51  |  March 2018

knitting patterns, which can be used by everyone: “My cuddly animals exist from one piece. You could say that whilst you are knitting, you can see the animal come to life.” The patterns proved to be an unexpected success, and her daughter Anna joined Annita as a partner in the Zijmaakthet company. From Asia to America and from Russia to the United Kingdom, Zijmaakthet’s teddy bear, mouse, elephant and even hippo patterns are wanted all over the world. With more than 15,000 sold, Jacobus the Monkey is the absolute number one. However, according to Annita the power of her stuffed animals is not just in the simplicity of the patterns. “It’s the friendly appeal, not just to children, but also for grown-ups. Eventually it is not the simple knitting patterns, but the strong image of a friendly, cuddly animal that makes us feel comfortable. It is a universal appeal.”