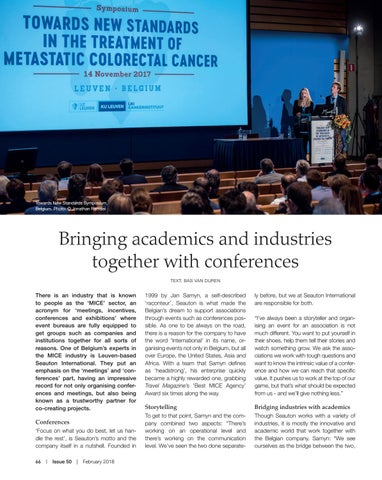 There is an industry that is known to people as the ‘MICE’ sector, an acronym for ‘meetings, incentives, conferences and exhibitions’ where event bureaus are fully equipped to get groups such as companies and institutions together for all sorts of reasons. One of Belgium’s experts in the MICE industry is Leuven-based Seauton International. They put an emphasis on the ‘meetings’ and ‘conferences’ part, having an impressive record for not only organising conferences and meetings, but also being known as a trustworthy partner for co-creating projects.

1999 by Jan Samyn, a self-described ‘raconteur’, Seauton is what made the Belgian’s dream to support associations through events such as conferences possible. As one to be always on the road, there is a reason for the company to have the word ‘International’ in its name, organising events not only in Belgium, but all over Europe, the United States, Asia and Africa. With a team that Samyn defines as ‘headstrong’, his enterprise quickly became a highly rewarded one, grabbing Travel Magazine’s ‘Best MICE Agency’ Award six times along the way.

ly before, but we at Seauton International are responsible for both.

Though Seauton works with a variety of industries, it is mostly the innovative and academic world that work together with the Belgian company. Samyn: “We see ourselves as the bridge between the two,

“I’ve always been a storyteller and organising an event for an association is not much different. You want to put yourself in their shoes, help them tell their stories and watch something grow. We ask the associations we work with tough questions and want to know the intrinsic value of a conference and how we can reach that specific value. It pushes us to work at the top of our game, but that’s what should be expected from us - and we’ll give nothing less.”